(Redirected from User:Prinz the overlord)

I WILL be off tomorrow. I want to be left alones 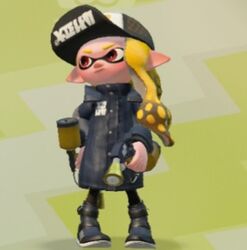 Jonathon. A male inkling who does the news. He formed an emo band, The Deep End. As a result of a childhood injury, he had his ink tank and color drained, so he has crystal tentacles. His twin siblings, Coraline and Mollusc, host the news. He made friends with Queenie

User:Prinz the overlord/Prologe Hello there I'm Prinz,Queenie, or Daisy, depending on how you know me. I am Autistic and in general an OK person. I'm on the Fire Emblem wiki, as SylvainLol

The theme is.... Queenie vs. Gloves! User:Prinz the overlord/Gloves Vs. Queenie

Queenie: Raven is organizing her 2nd minifest! Gloves: COOL! What's the theme? Queenie: Why don't you find out I'm scared! Gloves: Okay! It's... Me vs.You!? Queenie: Well I'm rooting for you Gloves! Gloves: I'm rooting for the Queen of team Emperor, Queenie! Prinz: Uh... guys? Gloves *Sighs* : it's cool I'm on Gloves, he's the cool one, that hair... Queenie: Gloves! Well then... I'm going Queenie! Emperor: Queenie for me! Prinz: Gloves!!! Everyone: Have an

(Eminence helped me make this shoutout to him (or her) )

Shoutout to User:OctoKing for this: