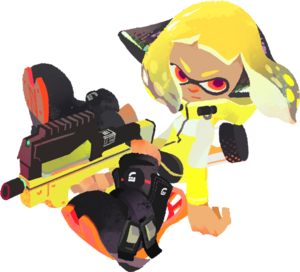 Just needed a picture here, and by the way, 4 is the BEST AGENT EVER and anyone who says otherwise is utterly wrong.

YESS I've finally picked up the courage to host a minifest!!! Here's the deets! ^u^ Whassup, YourUsername, I'm Firewave!

Notice!!! I decided to try and listen to all the "don't play too long at a time" lectures everywhere, so I won't play more than an hour at a time. (Let's see how long it lasts.) Don't look at that. No, really, don't. DON'T READ THAT

Not sure why people have these thing saying "this is my signature" but here: Firewave

In Splatoon 3, I want there to be another new ranked battle gamemode, two if possible, Flounder Heights and Kracken back because they look super cool, Tenta Missiles and Inkjet back because they're two of the best special weapons, and Booyah Bomb to be back but nerfed, and finally, make a new Hero Charger model. I think a lot of people want apartments, which sound cool, and Mr. Grizz to be the final boss, which also sounds good, (or at least he should have been ruined for cruel and unjust behavior towards salmonids). I hope the little buddy does something, like firing special weapons, or at least they should have a kind of pet shop thing. And a new horde mode would be good, maybe against dummies. Plus a same-console Super Smash Bros. mode or something. Plus, I want at least one inkling idol, and if some dooface breaks DJ's bubble AGAIN, I'm going to go crazy. Maybe there could be a open-world mode thing where you go around blasting the Calamari Inkantation into all evil Octarians's ears until they get free, but you have to do all these crazy platforming stunts to get to them(lol). I also want Iso Padre to replace Murch, a Tidal Rush remix with Callie's original song, and a "squid party" mode. League battles aren't restricted to friends and your partner changes once a month. Also, Dedf1sh has made a full recovery and is now part of a band. (In case you can't tell, I spend all my free time fantasising these things.)

My gear doesn't have all the abilities filled in as an octoling as I've only ever been in one splatfest (which I lost). Since I'm already talking about it:

But: back on topic.

My weapon: Either gonna be a Hero Charger, Hero/Kensa Splat Dualies, or a slosher. Or a brella (low chance tho.)

Yes I know there are way too many songs here

My opinion on things

Inner Agent 3 isn't as bad as people claim it is. I only spent like 2 hours on it. My little brother spent a lot of time on it compared to me and actually refuses to to try it by now. I beat it twice btw

Note that all of the edit barnsquids were mainly on my page/ink pump but I will try to help with S3 pages in the future.

Good and true quotes from other people that aren't mine

This exactly explains what goes through my head 7,648 times a day.