As with many games, Splatoon and Splatoon 2 went through many changes while being developed. This page lists all of those changes that we know of.

The 5 November 2014 Nintendo Direct showed off what would later be known as Octo Valley for the first time. However, there were many differences compared to the mode in the final release. 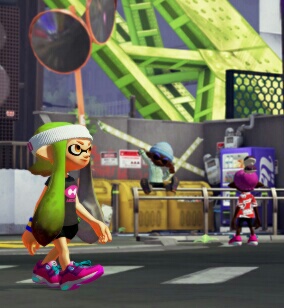 In the prerelease version of Splatoon, there were garbage bins near Inkopolis Tower. In the final game, it was replaced with Cap'n Cuttlefish's manhole to the entrance to Octo Valley.

The entrance to Octo Valley is Cap'n Cuttlefish's manhole. However, back then, the location of the manhole was slightly different. It was still in a corner, but there were no trash cans or a vending machine nearby. This might have been a totally different location, or perhaps the trash cans and vending machine were added later on.

Prior to the game's release, it showed a white wall behind Cap'n Cuttlehish's manhole, which mean it could've been near Shrimp Kicks or probably somewhere close to Booyah Base. But this could also mean that Cap'n Cuttlefish was actually at the location where Spyke is in the final game. Another difference is that the lid of his manhole is not a grate, like in the final game, but a flat, solid, surface.

In the prerelease version, the player had five lives; in the full game, this was shortened down to three, presumably for a little more challenge. In addition, the outline for the Sunken Scroll is different from the outline in the final version. Here, it looks more like an outline for 2 sheets of paper rather than a scroll itself.

As with many games, the light engine was much darker in the prerelease version. 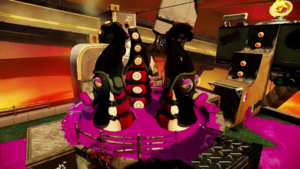 In one part of the trailer which appears to be in a level similar to the final game's Shifting Splatforms, a normal, standing Shielded Octotrooper can be seen firing ink rapidly. In the final game, this trait is only given to Twintacle Octotroopers, as normal Octotroopers will only fire one blob of ink at a time.

An unused Octarian variant can also be seen in the video. It appeared to be a tall enemy, wearing what appears to be a cloak, and was supposed to appear in a pool of ink. It is unknown if this was an early Octosniper, or just a different cut enemy.

Various changes in the multiplayer modes can be seen, including map differences and minor cosmetic differences.

Comparisons between the appearance of Saltspray Rig and Urchin Underpass at E3 and in the final game.

Shown in some screenshots, Inkopolis Plaza had a slight redesign before the game was released. All of the changes were aesthetic, and did not affect the Plaza.

An unobtainable Judd Facemask existed in early versions of the game, but it was later replaced by the Octoking Facemask. [3]

There is a model in Splatoon 2 called "PlazaTestPlayer" which appears to be a white female inkling. It was probably used as a test model for Inkopolis Square, but judging by the name, Splatoon 2 could also have been at one point still in Inkopolis Plaza.