From Inkipedia, the Splatoon wiki
(Redirected from Version 4.1.0)
Jump to navigation Jump to search
Version 4.1.0
For Splatoon 2 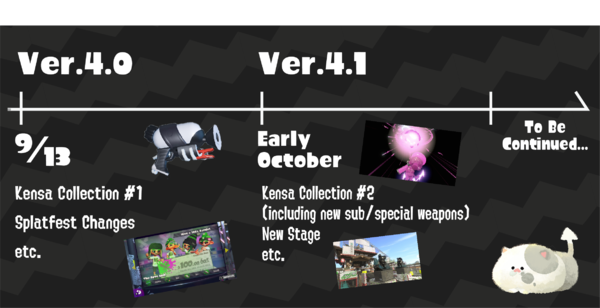 The second Kensa Collection, a line of weapons designed by Toni Kensa, was released with the update. It includes the Kensa Splattershot Pro, Kensa Luna Blaster, Kensa Dynamo Roller and Kensa Sloshing Machine. All weapons include either the new Fizzy Bomb sub or the new Booyah Bomb special.

A new bomb-type sub weapon – the Fizzy Bomb – was added.

A new special weapon – the Booyah Bomb – was added. A second special weapon - the Ultra Stamp - was teased, but was not yet included in this version and was added in 4.2.0.

Skipper Pavilion, the final stage to be added to the game, was made available with Version 4.1.0.[4]

Specifications for one of the sub weapons have been changed.

On 2 October 2018, a day before the update's release, the Japanese Splatoon Twitter account and Live from Squid Research Lab Tumblr account linked to a YouTube video showcasing some of the new features in the update. The video shows the automatic spectator camera function in Private Battle mode that was added in Version 4.0.0. It is a Splat Zones match on Skipper Pavilion, with Entropical as the background music, and with two of the players using the Kensa Dynamo Roller (showcasing the new Booyah Bomb) and the Kensa Luna Blaster (showcasing the new Fizzy Bomb).[5][6]