From Inkipedia, the Splatoon wiki
(Redirected from SplatNet Gear Shop)
Jump to navigation Jump to search

For the now-defunct website for use with Splatoon, see SplatNet.

SplatNet 2 is an online service for Splatoon 2, created by Nintendo and Hatena, which allows players to view upcoming stages, personal statistics, interact with friends and order exclusive gear.

This is the page that is automatically opened when starting up SplatNet 2.

This section located at the top of the page shows the player's Nintendo Account name, level, Ranked Battle rankings, and total turf inked, all of which are listed over their favorite color (one of six, cycled via the upper-right dashed-circle). This section also shows the player's favourite stage (changed by tapping on its name), as well as the player's current loadout of main, sub and special weapon, its freshness rating, total turf inked, and current gear with abilities. There is also a share button allowing players to share this information on social media.

If a Splatfest has been announced in-game by Pearl and Marina, a Splatfest section appears detailing the two sides which can be picked as well as the dates of the Splatfest. Upon tapping this section, the Splatfest section is opened. Here, the times of the Splatfest are shown and the teams that Nintendo Switch friends have chosen are displayed here too. The 'Splatfest Stats' can be opened by going back on the top left of the screen. Here, all previously completed Splatfests and their scores are displayed. The Top 100 of each team are also shown with the top five's weapons, gear and Splatfest Power being shown.

CPOD FM is where all of the latest Splatoon 2 news appears. This includes new weapons from Sheldon, the current stages, statistics for the last four battles from Judd, whether Salmon Run can be currently played as well as future shifts, SplatNet 2 gear that is about to expire, the player's Lifetime Inkage, if a Ranked Battle rank has increased, and advertisement and Nintendo eShop link for the Octo Expansion.

The Stage Info screen shows the upcoming stages for Regular Battle, Ranked Battle, and League Battle for the next 24 hours. Tapping on a stage brings up the player's current win percentages for Ranked Battles. A pink arrow on the side of the page shows how far through the current rotation is. The times shown are linked to the region specified by the Nintendo Account.

Directly below these words, the player's all-time ink points are displayed, separated by the amount inked while playing either overall or as Octoling. Underneath that, it shows how many points the player must ink to cover the next milestone. Turf inked as an Octoling counts toward the Inkling milestones, but not the other way around. Also, tapping on this section gives the player more information about their lifetime ink total, with options to share each milestone on social media. Below this is Weapon Stats that shows the player's lifetime ink total for their three most recently used weapons. Tapping on this section brings up another section, showing the player's stats for every weapon ever used. It shows the number of wins, lifetime ink total, and vibe of that weapon, as well as its sub and special weapons. The Stage Stats section shows the two most recently played stages. Tapping on this section brings up more detailed stats, including every stage played on recently and the player's win rate on them in each mode. At the bottom of the page, it displays the following:

On this page, the player's stats for the past fifty battles are displayed. At the top of the page, it shows wins, losses, average splats and assists per battle, and average special uses per battle. Below this, there is a share button. Further down is a detailed list of the battles showing if the player won or lost, the stage, how many points they had, and what weapon they used. The battles are also be divided into modes. If the user taps on any of these battles, a page shows up with almost the same information as when the player completes a battle in the game. However, some additional stats are not visible in the game such as the number of splats and assists, and the number of deaths. If the player taps on the info for the other players from the match, a screen pops up showing the gear the person wore together with their abilities. An option to report the player is also shown, which is the only way to report people the player has battled with. There is also a share button on this page. If the player has not played online multiplayer in the last three months, the data from the last fifty battles is deleted.

During the release of Version 4.1.0 for Splatoon 2, a Salmon Run section was added to the app that shows the player's stats and shift schedule. The top of the Job Stats section shows stats for both current and previous shifts as well as detailed results for the last fifty jobs. The general shift stats include the final player Rank, number of jobs, average waves cleared, average Golden Eggs, revives and deaths as well as total Grizzco Points, Golden Eggs, Power Eggs and revives.

The individual jobs' additional stats are more detailed than those shown in the game. It shows the Hazard Level degree, which is never displayed in the online version in the game, except for the "Hazard Level MAX!!" indicator. It shows the total number of Golden Eggs that were available in each wave, which specials were used in each wave, the number of Boss Salmonids defeated by each player, and what weapon and special each player had. Tapping on the player also brings up the option to report them. There is also a section that counts the number of Boss Salmonids defeated and how many appeared.

SplatNet Gear Shop is an online retail service run by Annie that allows players to buy pieces of gear with different main abilities (except for Ability Doubler) from their default ones. A new piece of gear is made available for order every two hours. There are only six pieces of gear available at one time, so a given gear is available for twelve hours in total. Once the time is up, the gear disappears and is unable to be ordered.

In general, the player may only have one kind of a particular piece of gear at one time. If the player orders duplicate gear from SplatNet, they will need to choose whether to keep the old gear or purchase the new gear, replacing the old gear in the inventory.

Six gear items were unintentionally sold on SplatNet 2 with main abilities that match their brand's favored sub ability. This issue was patched in Version 1.1.2 and has not occurred since. These gear items are:

The credits are found at the bottom of the Home page. SplatNet 2 was developed by Hatena and published by Nintendo. Every staff member is listed in the credits alongside the icon of their favourite weapon. 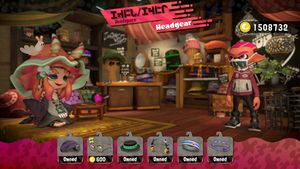