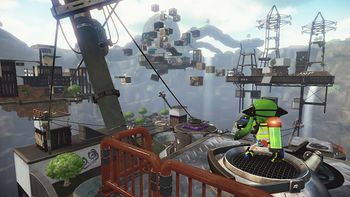 This article is about the location. For the mode by the same name, also known as Hero Mode, see Octo Valley (mode). For the similar location in Splatoon 2, see Octo Canyon.

Octo Valley is a hidden valley located near Inkopolis Plaza, which serves as the setting of the Octo Valley mode in Splatoon.

After following him through a manhole in Inkopolis Plaza, the player arrives in Octo Valley and meets Cap'n Cuttlefish outside his shack. He recruits the player as Agent 3, as part of the New Squidbeak Splatoon in order to steal back the Great Zapfish from the Octarians. The player goes through completing levels and defeating the Great Octoweapons. After defeating The Rampaging Octowhirl!, Cap'n Cuttlefish gets kidnapped, and soon comes in contact with Agents 1 and 2. Agent 3 soon completes all the levels in Octo Valley and battles DJ Octavio. Agent 3 defeats him and rescues Cap'n Cuttlefish and the Great Zapfish. DJ Octavio is placed in a snow globe outside Cuttlefish's shack. Replaying the final battle shows a scenario where DJ Octavio has escaped from his snow globe and captured Cuttlefish again.

The Squid Sisters Stories reveals that shortly before the events of the game, Marie returned to Octo Valley to find the snow globe destroyed and DJ Octavio missing.

In the game, however, Octo Canyon replaces Octo Valley as the single-player hub, and therefore does not appear and is never mentioned.

In the Octo Expansion, Cap'n Cuttlefish claims that Agent 8 and Agent 3 were battling in Octo Valley before being attacked and kidnapped. Marina also notes that she and Pearl are communicating with Cap'n Cuttlefish on Mount Nantai, which he states is nearby Octo Valley.

Octo Valley is a large, outdoor area surrounded by mountainous formations and octopus-shaped rocks. There are several waterfalls in Octo Valley. It is the home base of the Octarians, and is where single-player missions can be accessed. The player can enter Octo Valley via a manhole near the front of Inkopolis Plaza or by tapping "Octo Valley" on

. Under Octo Valley is a collection of many large domes, their interior walls covered with screens that display images of the surface. There are 33 Kettles scattered across the valley that will take players into these domes when they go through their grated surfaces in squid form. It has five areas, each connected to each other by Inkrails, except for the fifth area, which has blocks that need to be jumped across. Each level in an area can be completed in any order. Once all levels have been passed, the boss kettle for each section will open. The boss will need to be defeated to disable the power plug for the force field, which blocks the Inkrail to the next area. 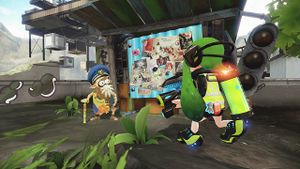 Cap'n Cuttlefish appears to reside in Octo Valley, as players encounter him standing outside a shack decorated with a large map. From here, players assume the role of Agent 3 and join Agents 1 and 2 in locating and defeating the Octarian army. Upon defeating DJ Octavio, he will appear inside a snow globe next to Cap'n Cuttlefish's shack, along with a floating credits board allowing the player to view Splatoon's credits again. When the snow globe is hit with ink, DJ Octavio will cower and give off a purple glow. Both he and Cap'n Cuttlefish will turn to look at Agent 3 whenever they approach.

Area 1: Area 1 is on top of a building, and is the smallest area. The entrance to Octo Valley is here, as well as Cap'n Cuttlefish's shack. Holds three kettles and one boss kettle.

Area 2: Area 2 appears to be a skatepark. The boss kettle is on a tower similar to the one at Blackbelly Skatepark. Holds six kettles and one boss kettle.

Area 3: Area 3 has lots of walls with the boss kettle is at the top. Holds six kettles and one boss kettle.

Area 4: Area 4 is accessible by Inkrail and Propeller Lift from Area 3. It has lots of square holes in the ground, which lead to platforms below. There are several Gushers and Inkrails. Holds six kettles and one boss kettle.

Area 5: The final area, Area 5, is a big platform with lots of blocks in the air. There are two ways to get up. On the right-hand side, there is a grate which goes behind the area and leads to a Propeller lift, taking the player up to the platforms in mid-air. The second way to get up is by an Inkrail near the back. Throughout the stage, there are lots of sponges, Propeller lifts, and Inkrails. Once the player gets to the top, they will find the top of an Inkrail that leads to the ground. Holds six kettles. The final boss kettle is located on a UFO flying above Octo Valley. A Launchpad is found at the highest point in the area, taking the player to it. 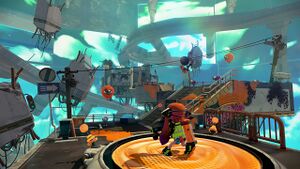 Agent 3 spawning into a single-player level.

Once the player enters Octo Valley, they can access the Octo Valley mode. From there, they can play 32 different missions (including boss battles) that feature various singleplayer-only mechanics such as Inkrails, sponges, and Balloon Fish.