For other things the name "Splatoon" is used for, see Splatoon (disambiguation).

Splatoon is a third-person shooter developed and published by Nintendo. The game features battles between Inklings, using weaponized ink to cover territory and "splat" opponents. The game was first revealed at the Nintendo E3 2014 Digital Event and was released for the Wii U on 29 May 2015. The game was very popular for the Wii U, selling 4.95 million copies[2] and being the sixth-best selling title on the system. 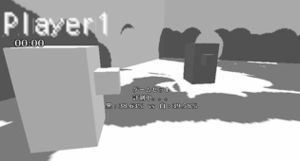 An early design of Splatoon featuring blocks of tofu.

Splatoon was first created by Nintendo Entertainment Analysis & Development in late 2013, directed by Yusuke Amano and Tsubasa Sakaguchi, and produced by Hisashi Nogami, longtime director for the Animal Crossing series. The team had thought of over seventy game ideas but decided to focus on a game involving inking turf. At first, this concept featured black and white blocks of tofu with noses that sprayed ink.[3] The game featured a top-down view, allowing the tofu blocks to blend in with their splattered turf.

A later design of Splatoon featuring rabbits on an early Urchin Underpass. Note the almost-complete Splattershot.

However, these characters presented a variety of problems, so development began on a different character that was vaguely humanoid in shape. A rabbit was chosen as the design because its floppy ears would indicate what direction it was traveling when viewed from above. Many EAD developers criticized this idea, so ideas such as Mario,[4] robots and macho men were considered. The rabbits were later scrapped in favor of a squid because the team wanted a character that made sense in regards to the environment and gameplay mechanics. The squids at this stage appeared to be squid-human hybrids, but it was decided that instead of this design, the game would feature humanoid Inklings with the ability to transform into squids.

The E3 2014 Splatoon demo was shown in-person in Los Angeles in June 2014, with local Turf War matches available to play as part of an early version of the game.

The single-player Octo Valley mode tells the main story of the game. Many years after the great Turf War, with the hope of invading the Inklings' world, the Octarians built an underground facility known as Octo Valley. After the disappearance of the Zapfish from the Inklings' world, the protagonist, wearing the Hero Suit, must infiltrate the base and rescue all the Zapfish.

Splatoon is a third-person shooter game focused on online multiplayer battles, in which eight players are divided into two teams of four. In the game mode Turf War, teams fight to cover the arena in as much ink of their team's color as possible. In Splat Zones, they try to control certain zones for a set amount of time by covering the Splat Zone(s) in ink. Players have two main forms and may switch between the two at will: their humanoid form, in which they can use weapons to spread ink and splatter opponents, and their squid form, which they can use to swim through ink at great speed and up walls, recharge the player's ink tank faster (while in their ink) and hide in their team's ink. Players can also utilize sub weapons, such as Splat Bombs, and special weapons, such as Inkzookas.

In the primary game mode, Turf War, players are awarded points based on the amount of land they cover in their team's ink—the team that covers the most territory within three minutes wins the match.

Splatoon also features a single-player Octo Valley mode, which sees the player travel to Octo Valley and traverse levels based on 3D platforming and puzzle-solving.

Since its initial launch, Splatoon received many updates to introduce new stages, weapons, and wholly new gameplay modes to the game's multiplayer mode. Also, Nintendo announced and hosted semi-regular community events called Splatfests, where players could pick a team to side with and play Turf Wars against each other for prizes and glory. Both upcoming updates, as well as upcoming Splatfest information, can be read about on the game's official Tumblr page, named Live from Squid Research Lab.

In June 2015, a Splatoon manga was released by Sankichi to celebrate its release in Japan. However, this was a fan-made one-shot, and the official version was released in December 2015 as a one-shot type until April 2016. 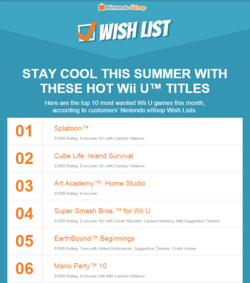 Splatoon shown as the most requested game on Nintendo eShop.