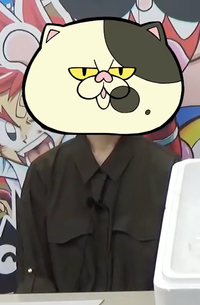 Sankichi with a Judd head to cover her face.

Sankichi Hinodeya (ひのでや参吉 Hinodeya Sankichi) is the creator of the Splatoon manga who worked on Kanitama-Kun, Arincho-Kun, Mega Man, and The Dempa Men. She also works for the Japanese manga company CoroCoro.

Sankichi joined Twitter in September 2010, posting a sneak peek of Kanitama-Kun. She posted a first look at a manga for Splatoon in April 2015 and in May 2015, she made the very first and unoffical issue of the Splatoon manga and was seen in June's CoroCoro issue. Sankichi made and published another one-shot Splatoon in December 2015 and was in CoroCoro's December issue as well.