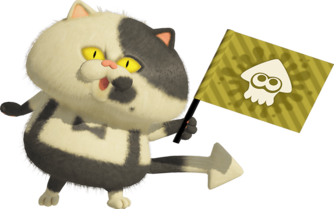 Judd is a cat in the Splatoon series who plays the role of judge in multiplayer matches and gives advice to Inklings and Octolings outside of them.

Judd is a white cat with black accents. There is a mole-like spot to the left of his mouth, a small black patch just above the mole, and a larger one near his left eye, over his left ear. His forepaws and hindlegs are black, while the arrow-shaped tail is black and white-tipped. The black fur on his body may look like a snazzy tuxedo, but it is said that the pattern is naturally occurring. This could be a possible play on "Tuxedo Cat".

As depicted in the Sunken Scrolls, Judd's appearance has changed over time. Judd seems to resemble more of what he currently looks like in the present according to Sunken Scroll 25, but looks much younger and smaller in appearance. In Sunken Scrolls 4 and 15, Judd appears to be much smaller and thinner than his current form. Sunken Scroll 14, which was documented at the end of the Great Turf War, shows that between the time of scrolls 15 and 14, he has recaptured his much "heftier" appearance.

Judd possesses the ability to judge turf area at a glance to separate the winners from the losers. Like real cats, he is seen sleeping most of the time but could be be seen dancing during Splatfest in the first two games. He uses cat puns in his speech, which is less sophisticated than his clone.

Judd is very intelligent, his intellect extending far beyond knowing all of history. He also has many connections with and holds an influential position with leaders across various nations.[2]

His Splatoon 2 relationship chart entry implies that Judd seems to view various individuals as food, or potential food. Amusingly, in some gag strips featured in The Art of Splatoon, he is shown hunting Inklings with the intention of consuming them.

During the apocalypse that would lead to the extinction of most land life, Judd's original human owner built a capsule designed to keep him cryogenically sealed for 10,000 years. He was injected with an immortality drug by his owner before being sealed in his capsule.

Judd was released from cryogenic stasis around 2,000 years before the events of Splatoon, as Sunken Scrolls depict Judd judging ancient Turf Wars and the Great Turf War, and seemingly participating in the Great Turf War on the Inklings' side. Three months prior to the events of Splatoon 2[5], the capsule Judd was cryogenically frozen in was reactivated and created a clone of him, a function his owner included in the capsule to ensure that Judd would not become lonely.

When he is not judging, he can be found sleeping on a blue crate on the Inkopolis Plaza, although he is said to live in Flounder Heights. The player can talk to Judd to get advice from him, as well as a potential cash bonus depending on the player's online battle vibe, which increases and decreases with wins and losses. He can only give one cash bonus per stage rotation.

Judd also rewards the player with items when he is spoken to after the player reaches a certain level. Specifically, speaking to Judd every five levels starting at Level 25 will reward the player with a new item.

After the final Splatfest, Callie vs. Marie, Judd began to give out one Super Sea Snail per thirty completed online matches when spoken to. Note that these matches can be either Turf Wars or Ranked Battles.[6]

Judd returns in Splatoon 2 and once again plays the role of the referee, now joined by his clone Li'l Judd. Judd represents the player's team, called "Good Guys", and Li'l Judd represents the enemy team, called "Bad Guys". When the Good Guys win, Judd brandishes a flag in their ink color and Li'l Judd falls in defeat; the opposite happens when the Bad Guys win. He once again takes naps when not judging battles, and can be seen sleeping in Inkopolis Square with Li'l Judd sitting on top of him. Judd and Li'l Judd can be spoken to like in the first game, with both cats giving advice, and the player can also earn a Super Sea Snail from Judd by talking to him each time they level up starting at Level 30.

Judd returns once again in Splatoon 3, fulfilling the same role as in Splatoon 2. He now naps in the Battle Lobby though without Li'l Judd. He still gives advice, but now he can also give tutorials to the player about sub weapons and special weapons. He also is an opponent in Tableturf Battle.

Judd, like in the game, judges Turf War rounds. His appearance is the same.