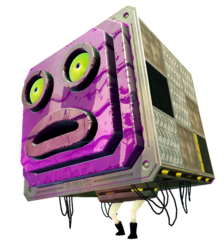 The Octostomp is one of the Great Octoweapons encountered in Octo Valley, later reappearing in Octo Canyon and the Octo Expansion.

The Octostomp is a robotic Octarian in the shape of a large cube with several layers on its Octotrooper-like face covered in dripping purple ink, with many elements appearing recycled from other sources. He has nine panels on all sides other than the underside, front, and the back. These panels vary between simple metal plates and asphalt, featuring yellow pavement markers and bike lane indicators. Similarly, the underside to which the legs are attached is visually identical to some floating Octarian platforms that appear throughout Octo Valley, retaining the flashing light pattern. The back plate features a hole from which the controlling tentacle emerges to grab Zapfish, and when faceplanted. He also has two legs that are thin and short in comparison to his size, but strong enough to allow him to jump high. In the second game, he is given an ink-proof jacket that appears to be made of thermal fabric, along with a rubber belt, overall resembling an insulated food bag.

Agent 3 facing off against the Octostomp

In Splatoon's Octo Valley, the Octostomp is the first boss Agent 3 encounters. He appears in the mission The Mighty Octostomp!, where Agent 3 have to dodge his attacks (which are him slamming his face into the ground) and climb up his body to splat the tentacle. After each phase, several panels from the side are removed and in the third phase, the panels will begin moving, making it harder to climb. Once Agent 3 has splatted the tentacle the third time, the Octostomp will be defeated and explodes.

Neo Octostomp with his new coat.

In Splatoon 2's Octo Canyon the Octostomp comes back as the third boss in his eponymous mission The Octostomp Returns, where this time he comes with a few tricks up his sleeve. The first phase plays out normally, where Agent 4 must dodge him and then climb to his back to splat the tentacle; however, he does have a new attack in which he rushes forward before smashing his face down. In the next phase, he gains an uninkable coat with a belt around him and is called the "Neo Octostomp" afterwards. Agent 4 must destroy the buckle to remove the coat to climb his sides. Additionally, an Octotrooper with a splatling-esque machine gun is seated on top of the Octostomp, firing ink at the ground at a rapid rate. Unlike the Octocommander, the machine gun does not appear to have a windup time and its fire rate does not become faster. In the third phase, he once again uses the coat, but now has two extra faces, making his attacks more difficult to avoid. After the third tentacle has been splatted he explodes, just like last time.

The Octostomp also appears in the Octo Expansion, where he has been Sanitized and renamed "Octostomp Redux". He now resides in Drop the Bass Station where he can be battled. The boss battle is very similar to the one in Octo Canyon, with the ink-proof coat and the Splatling-esque machine gun-wielding Octotrooper on top of the Octoling Redux, but there are differences. The Octostomp Redux has the ink-proof coat for all three phases instead of the last two and once the coat is broken, three sanitized bubbles similar to those created by the Bubble Blower are blown from the Octostomp Redux's climbable sides whenever he smashes onto the ground, which makes climbing his sides slightly harder.

Once Agent 8 has splatted the tentacle enough times, Octostomp Redux will be defeated and will, like always, explode. 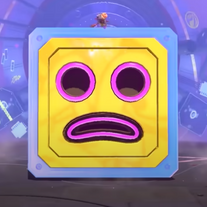 The Octostomp in Return of the Mammalians.

While the Octostomp does not make a direct appearance in Return of the Mammalians, an Octostomp's remains have been found and repurposed by Frye as a nest for her moray eels. They are fought as the second boss. The Octostomp's eye-sockets are empty, but it still makes Octarian noises when getting hit by the moray eels. This version seems to be based upon a self-balancing cube, with one of the fans visible where the tentacle once was.