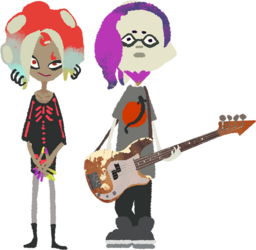 Artwork from Splatoon 2. Mashup is on the left, Quinn is on the right.

Diss-Pair is a musician duo comprising the former Squid Squad bassist Quinn and the Octoling DJ Mashup. Their music was added to Splatoon 2 in Version 4.1.0.

Their songs mix elements of metal and EDM, and feature low, husky vocals reminiscent of those heard in Ink or Sink and Metalopod.

Prior to their names being localized, Quinn and Mashup were referred to in official Live from Squid Research Lab posts by their Japanese names, Ikkan and Warabi.

Quinn is an Inkling and the band's bassist, formerly a member of the Squid Squad. He did not like how little tension there was during the song-writing process in Squid Squad, which is most likely why the band broke up. He is a fan of metal, utilizing deep riffs and husky vocals he occasionally used in the Squid Squad, and pairs himself with the younger Mashup, trusting that he will keep up the tension in their music.[1]

Mashup is an Octoling who is described as an up-and-coming prodigy beatsmith. He is a successful musician who regularly travels around the world, traveling to over 20 countries in a single year. His parents are famous actors, and as a result, he was exposed to many different types of music from around the world at a young age. He grew up with classical music education for gifted children, but got into electronic music in his teenage years, becoming famous by handling remixes of other popular artists. According to Quinn, while his demands seem all over the place, he is actually quite clever and intelligent. He met Quinn on a tour overseas, leading to the two joining together, although, from an outside perspective, it looked like they were fighting.[1] According to the Japanese Fam vs. Friend dialogue, he is friends with Marina.

"Diss-Pair" is most likely a combination of "dissonant" and "pair" (referencing the two members who sometimes do not get along), as well as a play on "despair".

Warabi's name comes from the Japanese word for bracken, "warabi", which is used to make various Japanese dishes. Bracken with octopus is considered a bad pairing of foods, making it "合食禁" (gasshokukin)