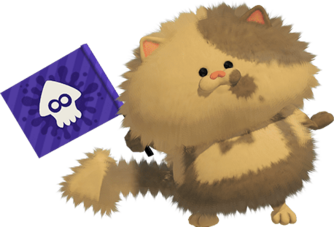 Li'l Judd is a cat in Splatoon 2 and Splatoon 3. He is a smaller version of Judd, with whom he judges multiplayer matches.

Like Judd, Li'l Judd is a bipedal domestic cat with a large head and body, small limbs, a tail that ends in an arrow shape, and tuxedo-like fur patterning. However, Li'l Judd has a smaller face in relation to his head, and his eyes are small and beady. His fur is fuzzier, and has a much lighter color. Additionally, his limbs are even smaller in comparison to his body. In Splatoon 3 Li'l Judd has an overall dirtier appearance with his fur having been stained brown and ruffled. After the player completes Return of the Mammalians, he also wears a headset.

As his name suggests, Li'l Judd shares many similarities to Judd. He gives the player advice when approached, and also helps judge matches. He is, however, set apart from his genetic original primarily by his inferiority complex and ambition. These combined traits drive Li'l Judd to plot against Judd, with him planning to supersede his original as the judge of Turf Wars. It is also implied that he is willing to use violence to achieve his goals, supported by that according to The Art of Splatoon 2, Li'l Judd "is waiting for his chance to stab Judd in the back" and Sunken Scroll 23 in Splatoon 3, which seems to describe Li'l Judd's preparations for a future assassination attempt on Judd. It is, however, unknown what Judd thinks of his clone, or if he even is aware of of Li'l Judd's hostility towards him.

His Tableturf Battle dialogue, however, shows an honorable side, and displays a vast vocabulary and sophisticated, albeit somewhat aggressive, speech. This starkly contrasts his diminutive size and general "cutesy" appearance, giving the dialogue a humorous bend. His speech mannerisms along with his plots suggests a high level of intelligence, or least pretensions to.

Together with Judd, Li'l Judd judges Turf Wars and Ranked Battles. Judd represents the player's team, called "Good Guys", and Li'l Judd represents the enemy team, called "Bad Guys". When the "Bad Guys" win, Li'l Judd brandishes a flag in their ink color and Judd falls down in defeat; the opposite happens when the "Good Guys" win. He can also be seen in Inkopolis Square sitting on top of Judd as he sleeps, and sometimes, when the player speaks to Judd for advice, Li'l Judd will give them advice instead. He often starts his advice with 'Mew!' rather than 'Meow!', implying that he is younger than Judd (who always starts his advice with 'Meow!').

In Sunken Scroll 27, it is revealed that Li'l Judd is a clone of Judd, created when the latter reactivated the capsule that he was cryogenically frozen in; the original owner of Judd included this function in the capsule to ensure that Judd would not become lonely.

Li'l Judd plays the same role as in the previous game, judging Turf Wars and Anarchy Battles and representing the enemy team. He also can be battled as an opponent in Tableturf Battle after the player reaches Tableturf rank 21. However, he is not found together with Judd in the Battle Lobby, and thus no longer gives advice to the player.

"Meow! (Looks like you've leveled up enough to put your skills to the test in Ranked Battles! Ranked battles are for Inklings who mean business. Press

in the lobby to check out the rules.)" --Said after reaching Level 10.

"Meow! (Do you have any Ability Chunks yet? When you scrub gear or reallocate abilities, the original abilities become ability chunks. Ability chunks don't do much by themselves, but you can combine them to make abilities on demand! And keep an eye out for the young urchin lad. He knows just what to do with ability chunks!)"

"Meow! (To master Shooters, it's impurrtant to get your reticle firmly on your opponent. When you've got the enemy in your sights, the reticle will change into an × symbol. Wait to see this symbol before pressing

to pull the trigger. And when your attack strikes your opponent, you should be able to hear and see it. Knowing whether you're hitting the opponent or not will help you adjust your aim if necessary.)"

"Mew! (Keep an eye on the icons at the top of the screen to see which team has the advantage. Tread carefully if your team's numbers are low, and be bold if you've got the enemy on the ropes!)"

"Mew! (Swimming around fast in ink will make little ripples that your opponent's might notice. Tilt

gently to swim slowly and sneak up on opponents without making a splash!)"

"Mew! (In Tower Control, the team that rides the tower into the opponent's goal wins. You can make the tower's path safer by splatting any oppawnents in its way ahead of time.)"

"Mew! (In Splat Zones, the team that keeps control of the Splat Zones in the stage wins! You'll need to plan out the best way to keep the Splat Zones free of enemy ink. Don't try to be a hero. Coordinate and attack together as a four-purrson team!)"

"Mew! (In Rainmaker, the team that carries the Rainmaker to the other team's goal wins. The Rainmaker is powerful, but it's not good at close range. Work with your team to stay safe.)"