For the Splatfest from Splatoon, see Love vs. Money. 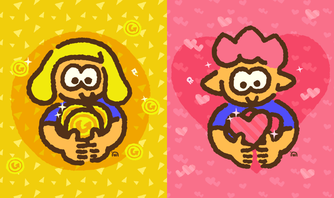 Money vs. Love was a Splatfest event in Splatoon 2. It was held in North America and Oceania. It was announced on 10 February 2018. The results were given on 18 February 2018.

The full name of each choice was "MONEY" and "LOVE". The team name portion of Splatfest titles was "Money" and "Love".