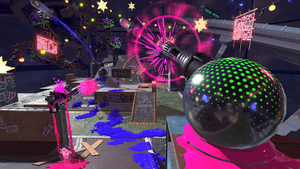 Cannon Fire Pearl is a multiplayer stage in Splatoon 2. It was the seventh variation of Shifty Station, and first appeared in the Champion vs. Challenger, Gherk-OUT vs. Gherk-IN, and Money vs. Love Splatfests. It returned in the Chaos vs. Order and Super Mushroom vs. Super Star Splatfests. As of Version 5.0.0, it is exclusively available in Private Battles. Its main gimmick is large Ink Cannons that can be used to fire at opponents.

This layout is made of up a valley between two inclines. The spawn points are at the top of each incline, with an Ink Cannon atop a steep, uninkable cliff on the right side just below the spawn. The cannon nest is flanked by a tall wall so that an enemy climbing up the slope to reach it has gone almost all the way up to the spawn point to get behind the cannon.

The stage is dotted with small walls that can be used for cover. The center of the stage has a small hill with another Ink Cannon on it. The base cannons cannot reach each other, but they can reach and be reached by the center cannon. To the sides of the central hill are two tall blocks which can only be inked and climbed from the closer team's side, and can serve as sniper's nests overlooking the center.

When a player is occupying a cannon, they are positioned on top of the sphere which makes up the cannon's body. This means that high-accuracy weapons such as chargers have to aim a little above the cannon to hit the player inside it. When a player leaves the cannon, they are dropped behind it relative to the way they are currently facing. In the case of the base cannons, if facing backwards, the player will fall down the cliffside, allowing for a quick escape if flanked.

Cannon Fire Pearl is named after the Camp Fire Girls novel series written by a variety of authors, but started by Margaret Penrose. The name additionally refers to the Ink Cannons on the stage, as well as Pearl.