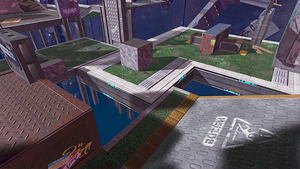 Players spawn on either end of the stage, on raised platforms that lead down to sequentially shorter platforms connected by ramps. To the right is a large open area, and straight ahead is a small passage connecting the two halves of the map. In the gaps between each half of the map are two medium-sized platforms that periodically move side-to-side.

Wayslide Cool is named after the Wayside School books by Louis Sachar, as well as being a pun on the large sliding platforms seen in the stage. It is also likely a play on the phrase "way cool".