Musselforge Fitness is a multiplayer stage in Splatoon 2. It is a sports club with climbing walls and a numerous amount of sports equipment.

Musselforge Fitness is a sports club that features many high vantage points that look over low areas. It also has many steep ramps leading down to lower parts of the stage. The most distinguishing feature of the stage is the raised hill that comprises the majority of the central area. This area is a large trapezoid prism with the slopes located on each side, which are the primary obstacle in the center of the stage as players above have a vantage point. To the sides of the central area are walls and corridors for tight quarters combat, as well as hallways between each team's side and the central structure. In the lower area to each team's left is a relatively open area with a sponge as the main obstacle. Two grated bridges connect to a small part of each team's side, from here another grated walkway off to the side will allow access into the enemy base.

The Splat Zone can be found on top of the climbing wall, in the center. Part of the zone is located on the slopes leading downwards. The map has remained unchanged from Turf War.

The Tower is located center stage on top of the rock-climbing hill. The Tower moves down the ramps on the sides of the central area of the stage, then starts to move towards the spawn point. It turns right and goes down the thin alleyway, then turns left to the goal. Blocks and ramps have been added throughout the map to help get into enemy territory faster.

The Rainmaker is located center stage on top of the rock-climbing hill. The goal is located to the front of the enemy's upper area. There are only two ways to getting up to the goal. To the right, players can follow a newly added ramp which allows them to get into the enemy base or upon crossing the grated bridge. An Inkrail can be taken to get deep into enemy territory. The path to the right leading into the enemy base has been expanded to allow more combat.

The baskets are located just on the upper layer of the enemy base. However, they are designed to be low enough so clams can be thrown from the level below it. The layout of the stage is similar to Rainmaker except for the expanded area leading into the enemy base being normal-sized. 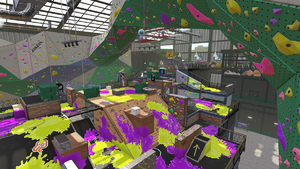 "Mussel" in "Musselforge" is a reference to bivalve molluscs of the same name and, as the subtitle for Octoling Workout points out, a homophone of "muscle".