Splatoon 2​
The Chronicles of Rolonium 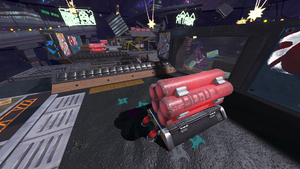 The Chronicles of Rolonium is a multiplayer stage in Splatoon 2. It was the twenty-second variation of Shifty Station, and first appeared in the Ce vs. Pa and Time Travel vs. Teleportation Splatfests. It returned in the Chaos vs. Order and Super Mushroom vs. Super Star Splatfests. As of version 5.0.0, it is exclusively available in Private Battles. It features bundles of Rolonium that roll across hills and can splat players in two hits.