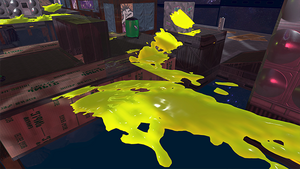 Zone of Glass is a multiplayer stage in Splatoon 2. It was the sixth variation of Shifty Station, and first appeared in the Action vs. Comedy Splatfest and returned in Chaos vs. Order. As of version 5.0.0, it is exclusively available in Private Battles. It features invisible platforms and long Squee-Gs that move without interruption.

The spawn point for each team is on a raised invisible platform which ramps down to a wider open area. These areas connect via more invisible inclines to a central area dominated by a platform that rises and sinks back into the floor periodically. This platform's walls are also invisible, and each time it sinks into the floor all ink on the walls disappears. To the sides of the central area are two smaller "courtyards", in the middle of each of them is an invisible block with inkable top flats which is constantly circled by long, flat Squee-Gs, shaped like Spreaders which wipe off all ink (leaving the top inked but cleaning the walls of the block).