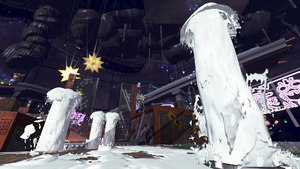 Gusher Towns is a multiplayer stage in Splatoon 2. It was the sixteenth variation of Shifty Station, and first appeared in the Pocky Chocolate vs. Pocky: Gokuboso, Salsa vs. Guac, and Eat It vs. Save It Splatfests. It returned in the Chaos vs. Order Splatfest. As of version 5.0.0, it is exclusively available in Private Battles. Its main features are Gushers, which can be used to reach higher areas on the stage, or alternatively, block off opponents' access to certain areas.

Spawn points are located on opposite ends of the stage and are inaccessible. In the middle is a structure that has the top accessed by a Gusher. On the top there are grates and walls for cover. The bottom of the structure has two openings that can cross to the other side but can be blocked off by activating the Gushers. The left of the structure is climbable and can be used to get to the other side but not on the top of the structure. To the right is an area that can be accessed by a Gusher or by the spawn area. to the left is a little pit area with a box in it. To get to the spawn area, the player has to activate gushers that raise to then jump to the area.

Gusher Towns is named after the book Paper Towns by John Green. The name refers to the Gushers found around the stage.