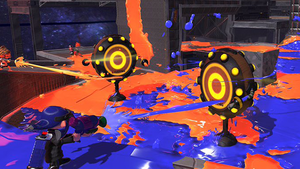 Zappy Longshocking is a multiplayer stage in Splatoon 2. It was the tenth variation of Shifty Station, and first appeared in the New Lifeform vs. Future Tech and Pulp vs. No-Pulp Splatfests. It returned in the Chaos vs. Order Splatfest. As of version 5.0.0, it is exclusively available in Private Battles. Its main gimmick is Ink Switches that can be used to move walls and platforms.

Zappy Longshocking is laterally-symmetrical like Saltspray Rig. It contains many ramps and long narrow corridors. The spawn points are located near each other but separated with a tall glass wall that extends all the way to the center (however, splats against the junction where this wall meets the floor may cause a small amount to leech to the other side). From spawn, it is downhill that leads to the center where are three Ink Switches are placed. The center one rises an uninkable wall in the middle while the two others lift climbable platforms on each side respectively. The platforms, when raised, allow full access to that side's respective home base.

Zappy Longshocking is named after the book Pippi Longstocking by Astrid Lindgren.