Camp Triggerfish is a multiplayer stage in Splatoon and Splatoon 2. Surrounded by a thick forest, the stage takes place on two forts built over a lake, and are only connected on a few small paths. Certain gates are lowered in Turf War and Ranked modes, with the latter being lowered at the start of the match while the former will only descend in the final minute of a match.

Camp Triggerfish consists of a series of bridges over water and a large area near the team's spawn point, along with a shelter that can only be accessed via a grated pathway in Turf War. Both bases at Camp Triggerfish have a set of floodgates that open and close periodically. When the gates are down, it is easier for other teams to enter.

Teams begin on opposite sides of the stage with bases immediately splitting into two paths. The left path leads into a large, circular area surrounded partially by a net over water. This area extends into a narrow walkway ending in high, wooden walls. The path right of each team's base leads directly into the central walkways, which are also accessible by climbing over the aforementioned walls. This path leads into an open area below a series of net catwalks, which can be used to enter the other team's base or the shelters behind their floodgates.

The areas in front of the spawns are very large areas to claim turf. However, since they are very close to the areas where the enemy team can cross over to the other side, they tend to attract enemy players that manage to sneak over. Finally, these areas also lead to the backside of the walls of the center "flat boards" - areas in the middle of the map that do not have much turf to cover, nor any direct path to cross the water canal. These areas allow players to reach the top of the wall as a good perch for chargers.

Many early splats occur on the center flat boards due to the short distance between sides. On both sides, there are three sections each where grates go over the water. While only the farthest of these allow the player to cross over to the other side of the map, it should be noted that these grated areas are great spots to shoot enemies that are on the other side. However, this is a very exposed area due to the lack of solid footing.

Floodgate shelters are areas on the far ends of the map that lead directly to the open area in front of spawn. While this area is a good spot to sneak over to the other side to get enemy turf and surprise splats, it is easily accessible by the other team via the floodgates that drop in the final minute of the battle.

Camp Triggerfish features an ambiance of chirping birds, and when players are close to the lake, rippling water as well. Upon spawning, the chirping of crickets can be briefly heard before fading.

In Splatoon 2, the most notable change made is the change to the floodgates and area immediately behind them. Instead of having two floodgates, they have been replaced by a single wider gate and the area behind has been changed from a narrow corridor to an open square plaza. Two Inkrails have been added to each side of the map; one directly in front of the spawn point, allowing players to infiltrate the enemy side. The other is behind the wall close to the center of the map which allows a quicker path to the left side of the map.

Camp Triggerfish has two Splat Zones located on opposite sides of the canal in the middle of the map. It is possible for one team to completely gain control of both zones without setting foot into enemy territory just by shooting across the canal. The blocks on top of the Splat Zones do not count towards taking control of one.

The Tower starts in the center of the two center platforms on an added platform in between. When activated, the Tower travels over the water dividing the two sides, passing by the many grated areas on either side, until it climbs up the gated section, before ending in the middle of the wide pathway in front of the spawn point.

In Splatoon 2, during Tower Control, an additional wooden path connects the area immediately in front of the spawn to the platform on the right, making accessing the enemy side easier. The Tower now goes right near the Inkrail and does not go into the floodgate area. Checkpoints have also been added for the Tower:

The Rainmaker starts on top of an added platform in the center of the map, bridging the gap between the two sides. The goals are located on opposite corners of the map, inside the floodgate shelter on the side closest to the opposing team's spawn point. A stack of blocks and an inkable wall have been added to help players reach vantage points and other parts of the map quicker, as well as wooden platform added next to each of the teams' bases so they can access their side of the goal faster. Two blocks have also been added to the roped bridges to aide in attacking any player on top of the grated platform on the other side, and to provide a hiding spot for both teams.

In Splatoon 2, the location of the Rainmaker remains the same. The pedestal has been moved closer to the middle of the Floodgate. The sponge is replaced with a Inkable wall and the grate area next to the inkrail now connects to the floodgate area, allowing another way to get to the pedestal. The area added to the right of spawn in Tower Control is present in Rainmaker.

The goal is in front of the spawn point and a bump is present. A piece of terrain is present allowing for teams to get from their spawn point to the area that has the gate leading to the larger area. However, the Inkrail near the spawn point is still there. The sponge is replaced with an inkable wall and an uninkable staircase is on the other side of the inkable wall to make getting to the top harder.

Camp Triggerfish underwent a series of multiple changes between its development period and release. 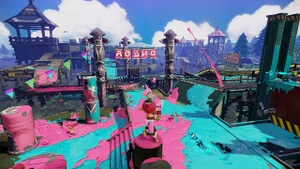 An early version of Camp Triggerfish appeared in many trailers for Splatoon. The pre-release version included many differences, such as:

The stage image for Camp Triggerfish has notable differences from the final design.

A second early design for Camp Triggerfish can be seen in the stage's main image in Splatoon. While this design is much closer to the final version, there are still noticeable differences:

Camp Triggerfish was available in the following Splatfests in Splatoon: 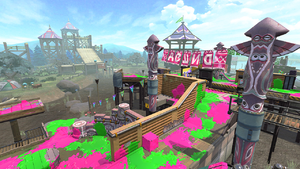