Mahi-Mahi Resort is a multiplayer stage in Splatoon and Splatoon 3. It takes place inside a swimming pool next to a large hotel. After ninety seconds, the water level changes, opening up additional turf and modifying the height of certain platforms.

Mahi-Mahi Resort is a series of platforms located in a squid-shaped swimming pool next to a large hotel. It features a plethora of grates and inkable surfaces of various elevations and is surrounded by water. Mahi-Mahi Resort is unique in the fact that when a round is halfway over, the water level recedes and a large section of the stage that was previously inaccessible is uncovered by the receding water. Some platforms also rise during this time. All of the floating platforms in Mahi-Mahi Resort can be found here in the center. They get lower in elevation as the water recedes. There are three high platforms in the center, providing higher points to attack from, and can be used as an easy way to quickly reach the enemy team's base at the beginning of a match. Two towers become visible once the water level lowers, providing a little more cover from attacks and a place to attack from. Side platforms can be found close to the center, surrounded by water. These can provide good sniping points for chargers. When the water recedes, two platforms rise, creating more vantage points and area to cover.

In Splat Zones, the block in the center has been removed and a platform covers the moat and acts as the Splat Zone. Once a team's meter reaches sixty points, the water level drops, revealing the many platforms under the water's surface, creating some cover and more area to move about. A few walls have been added to provide cover and space to move and attack.

In Splatoon 3 the Splat Zone is located in the center of the map, taking most of the center. The center raised area in the middle is removed and the other raised areas now have an inkable wall to get up to. Some barriers near the center has been removed. The water level drops when the team's meter reaches 60.

The Tower in Mahi-Mahi Resort starts in the center of the stage, on top of a block that can only be climbed on two sides. When activated, it goes to the enemy's base around floating platforms and higher ground. The water level automatically drops at the beginning of each game.

In Splatoon 3, the Tower starts in the center, going left then straight to the opponents raised area. It then goes right then straight to the goal. The three raised areas in the middle are removed and the ground underneath the Tower path is removed and filled with water. The water level drops once a team has passed the second checkpoint. The ground underneath the tower path is filled after the water level drops.

The Rainmaker in Mahi-Mahi Resort starts in the center of the stage, on top of a large crate. Each goal is located in their respective team's base, on the level immediately below. A few floating platforms have been added and some boxes have been placed to aid the player carrying the Rainmaker to proceed to the goal. A row of balloons has also been extended to block Rainmaker shots. Once the Rainmaker's meter reaches forty points, the water level drops, revealing more platforms, walls and a ramp to make traveling into the enemy's base easier.

The Clam baskets are located in the raised area of each team's side. The layout is similar to the Rainmaker layout. The water level drops when one team reaches 50. 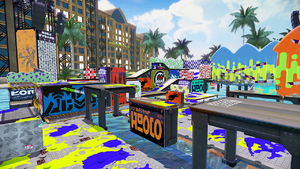 Mahi-Mahi Resort was announced on 12 November 2015, during a Nintendo Direct that also revealed Museum d'Alfonsino. It was released on 4 December 2015 at 02:00 UTC.[1]

Mahi-Mahi Resort was available in the following Splatfests in Splatoon: 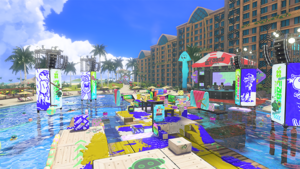 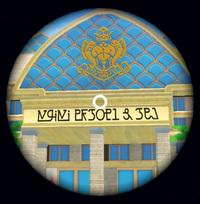