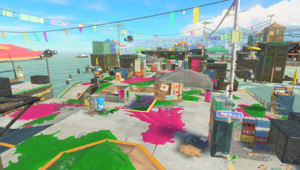 Hagglefish Market is a multiplayer stage in Splatoon 3. It takes place on a busy pier with jellyfish vendors selling many types of seafood and goods. 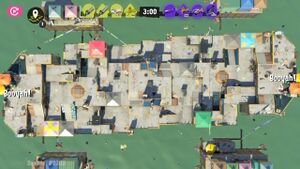 The spawn areas are on raised areas and are inaccessible to the other team. Uninkable tents are located on the right of the spawn area. The first drop is an open area that also goes to the right, underneath the tents. The open area is accessible to the other team by ramps. Another tent is more forward to the open area. To the left of the open area is a raised area that goes to the left of the ramps. The center is slightly more raised than the lower area and has large uninkable boxes surrounding it. To the left and right of the center are wide paths that allow more flanks and additional access to the middle.

The Splat Zone takes up a majority of the middle, in between the two raised uninkable towers. A block is added to the right-side route to allow easier access to the higher ground. Other than that, the stage is similar to the Turf War layout.

The Tower starts in the middle of the stage, replacing the block that is usually there. The tower strays towards the right for almost the entirety of its route until it goes up the ramps leading towards the first drop-down from spawn. After it goes up these ramps, it is only a short distance until it reaches the goal. The left side route now ramps up to be even to the middle section.

The Clam Basket is located towards the left of the first drop-down from the player's team's spawn. The stage is similar to the Rainmaker layout, but the tents closest to the middle now have a climbable wall. An ink rail is added in the middle of the user's base to allow easier access to the tent.

Hagglefish Market was released with the launch of Splatoon 3.