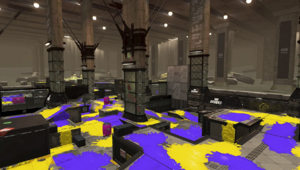 Undertow Spillway is a multiplayer stage in Splatoon 3. It is an abandoned underground flood bypass in Splatsville that was renovated into a Turf War stage.

There are two Splat Zones, both located underneath the glass areas. An uninkable ramp is added to allow access to the opposing team's base.

The Rainmaker is located in the middle of the stage, replacing the Bumper normally there. The checkpoints are located in the open area to the right, and to the far left on the opponent's raised area. A ramp is added to the far left to allow access to the checkpoint. The pedestal is located on the first drop The right of the spawn areas have been altered slightly, having an uninkable path being the only way to get to the pedestal. An Inkrail is added to the far right of spawn.

The Clam basket is located to the left of the spawn, two drops down. An uninkable ramp has been added just behind the basket to help access the platform behind it.