Wahoo World is a multiplayer stage in Splatoon 2 and Splatoon 3. It is designed after an amusement park. It features a large rotating platform in the center of the stage, as well as extending and retracting bridges.

Wahoo World is a stage based on an amusement park. The layout of the stage is primarily divided into three overlapping circles. On each end is the circular area where each team's spawn point is, located at the highest point of the stage. This area is comprised of many layers, some inaccessible to the opposing team. To the right is a ramp which connects the lower and middle ground. The main feature of the stage is the large rocket ride that comprises the center circle of the stage. While the rocket ride itself is inaccessible, the area around it at ground level is and spins clockwise with two arches across from each other, with the side that is not facing the direction it is going becoming inkable. Two bridges extend and retract on the top level. It follows a pattern of beginning to extend or retract every thirty seconds. Whenever the bridge is extended, the central area stops moving. To each team's right, there is a ramp which leads to a glass bridge which is always extended to the area on top of the rocket ride.

Wahoo World is an amusement park on a boardwalk. The stage is set on a part off of the boardwalk, surrounded by water. There are vending machines and trash cans to the right of the spawn point and maps of the park in front of it. The walls have various graffiti stickers plastered on it and the ground is littered with confetti. The sides have a large sushi shop on the top level with jellyfish as patrons, with the color of the shops determined by the current ink colors, being that the team's color is on their side's left. On the bottom level is a souvenir shop stocked with sushi-based merchandise. The bottom of the center has a rocket ride being ridden by jellyfish, surrounded by a glass wall, while the other side contains electric boxes and wires, also surrounded by glass. On the central platform on top of the rocket ride shows the "Wahoo World" logo.

The top level has a LED sign that shows when the retractable bridge is going to extend out, with it showing a red 'X' when it is currently closed or retracting, and shows a blue sprite from Squid Jump when the bridge is currently out or extending. The turf is mainly wooden planks, with some of the ramps and the extending bridges being topped with diamond plate, with the bridges' pattern being arrows showing the direction the bridge extends. The distant background has several rides and shops. There is a pier directly behind one of the bases with food vendors, with one of the shops topped with a retrofuturistic rocket, while the other side has the roller coaster wrap around it. The boardwalk has many colorful tents, a jellyfish performing a juggling act, a drop tower, the start of the roller coaster, a carousel, and a Ferris wheel. Several palm trees are grown on the boardwalk and various speakers are visible.

The Splat Zone is in the center, with it being circular and above the rocket ride in the middle. The moving platforms and the bridge in Turf War stay open, allowing for easier mobility. Walls are added on the bridge, and platforms are added around the center.

The Tower is located at the center of the stage, on top of the rocket ride. It travels diagonally left and descends straight down in the air to ground level. It then follows through the narrow hallways on the left up into the enemy base where it reaches its destination.

The platforms that move in Turf War act as they do in Turf War. The pedestal can be jumped off to place the Rainmaker and directly reach the enemy spawn point. The moving wall platforms have a hole in them, making it easier to reach the other side. The block separating the left area from the layer with the Rainmaker Pedestal is removed, allowing access to the left area from that layer.

The basket starts to the left of the spawn point and the moving platforms behave like they do in Turf War. The moving wall platforms now have a hole in the center for quicker access. The layout is similar to Rainmaker. 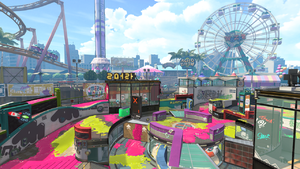 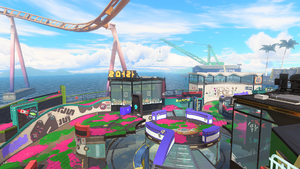 Wahoo World returns in Splatoon 3 with the same stage layout. The spawn areas have been changed to fit to the Spawner drone system.