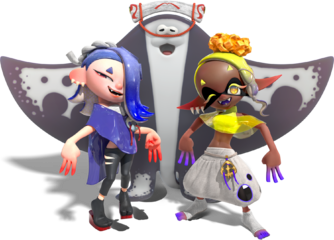 Deep Cut is a band in Splatoon 3. It is a trio composed of an Octoling named Shiver, an Inkling named Frye, and a manta ray[1] named Big Man.

As Splatsville's idols, Deep Cut fulfill many important roles. They provide updates on maps, stages and modes via their television and radio show Anarchy Splatcast, as well as host and perform during Splatfests, with Shiver, Frye, and Big Man each representing one of the three teams in every festival. These responsibilities are similar to that held by the Squid Sisters and Off the Hook from previous Splatoon games.

Between broadcasts, Deep Cut can be found in their news studio to the left of the Battle Lobby Tower. In addition to their day job as presenters, they secretly work as bandits to steal treasure, sell it, and split it among the poor while keeping a small amount for themselves.

Deep Cut appears as antagonists in Return of the Mammalians, warning the New Squidbeak Splatoon that Alterna is theirs to plunder, attempting to intimidate them to no avail before disappearing. Frye, Shiver, and Big Man are thus fought as the bosses of the second, fourth, and sixth sites, respectively. Once each member is defeated, they attempt to escape using a smoke bomb, which always malfunctions and results in sending themselves flying away, revealing a piece of "treasure".

Once all three members are defeated and each piece of treasure is collected, the New Squidbeak Splatoon assemble each of the pieces into a lawnmower-like tool, which the Captain uses to cut up the Fuzzy Ooze surrounding the rocket, getting injured in the process. Due to this, Callie and Marie agree to go ahead with Agent 3, but before they can, Deep Cut appears, once again trying to reclaim the treasure, but to their immense shock, Marie hands it over without a fight. Touched by their generosity, and now feeling guilty about fighting Agent 3 to the death, they ask Marie to be their boss, who reluctantly accepts.

Soon after Agent 3 manages to climb the rocket to fight their enemy, Mr. Grizz, shortly after the latter flies away on his rocket, Deep Cut combine each of their respective powers to propel Agent 3 into space (aside from Big Man, who gives Agent 3 a new set of headphones designed for space). During the mid-point of the battle against Mr. Grizz, Agent 3 gets blasted off of the rocket before getting caught by DJ Octavio's mech. Deep Cut and the Squid Sisters watch from the ground, before Callie yells 'we'll hype you up from here' and Deep Cut and the Squid Sisters collaborate to perform the Calamari Inkantation 3MIX as Agent 3 fights Mr. Grizz with DJ Octavio's help.

The term "deep cut” is used to refer to a more obscure song by a well-known musician. Like the Japanese band name, “Cut” in the band's name is also a reference to minced seafood. It may also be because the members take a 'cut' of the pay when they steal.