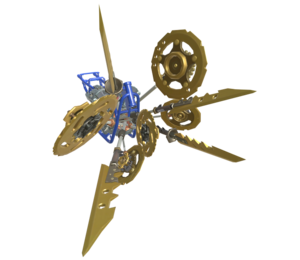 The treasure is a key item constructed in Return of the Mammalians in Splatoon 3.

It is a lawn mower-like tool assembled from three parts: frame, motor, and blades. The player must defeat Deep Cut members Frye, Shiver, and Big Man in order to obtain these three parts, as Deep Cut wants the treasure for themselves.

After collecting the three parts, the treasure is then assembled into a tool by the New Squidbeak Splatoon members Callie and Marie, with the help of the Captain. The Captain uses the assembled treasure to remove a colossal mass of Fuzzy Ooze which was blocking the path to the final boss area, the Alterna Space Center.

As they make their way inside, Deep Cut appears to fight the team for the treasure, but Marie offers it to them for free after having already used it, causing Deep Cut to apologize and make Marie their boss. Later on, it is revealed that Deep Cut were after the treasure to help struggling citizens in Splatsville by selling it.

The treasure is similar to the Thangs from the Octo Expansion in terms of its role, with both being pieces of large tools that are collected in special levels and assembled in order to reach the final boss area.