Return of the Mammalians​ 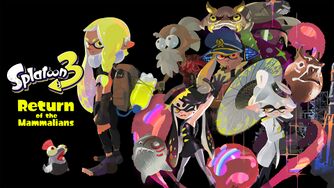 This article is about the single-player mode of Splatoon 3. For the mission, see Return of the Mammalians (mission).

Return of the Mammalians is a single player game mode in Splatoon 3. It involves the player donning a Hero Suit and venturing into the Crater and Alterna (the setting of the story) to defeat the Fuzzy Octarian army.

An Inkling or Octoling, accompanied by their "little buddy" Smallfry, are scrap hunters who search for junk gems by day and splat it up in Turf Wars on the side. When they go through a manhole, they meet Craig Cuttlefish on the other end at the Crater, who dubs them the new Agent 3 of the New Squidbeak Splatoon. The New Squidbeak Splatoon's mission is to stop the continued fight against the unruly Octarians, who are suspected of the recent disappearance of the Great Zapfish in Splatsville.

The areas throughout the campaign have a large amount of Fuzzy Ooze. To get through areas, Agent 3 has to take care of the Fuzzy Ooze, which Smallfry can eat as long as they have the right amount of Power Eggs. Cuttlefish also notices that the Octarians have fur grown over their body, as opposed to their previous appearances where they were smoother. When Cuttlefish tries to contact Agent 1 and Agent 2 to come pick them up, DJ Octavio intervenes, but Cuttlefish dismisses it as his radio being broken.

After reaching the center of the Crater, DJ Octavio appears in his battle mech named the Octobot King L3.Gs, trying to confront the two for the recent disappearance of his Octarian army, but when asked about the stolen Great Zapfish, states that he does not even know about it this time, and engages Agent 3 in a fight. Upon being defeated, Octavio tells Cuttlefish and Agent 3 that he indeed did not steal the Great Zapfish, and Cuttlefish thinks that someone else might have done it, but before they can continue, the ground beneath them collapses as Fuzzy Ooze flows out. A piece of Ooze takes Cuttlefish away from Agent 3, who loses their Hero's Suit and Power Eggs in the fall. Agent 3 then wakes up in Alterna, where they are greeted by the New Squidbeak Splatoon comprised of the old Agent 3 (now Captain) and the Squid Sisters.

The new Agent 3 is also aided by a robotic assistant named O.R.C.A., who helps guide them through Alterna.

At the end of Site 1, Future Utopia Island, Deep Cut makes their entrance and makes it clear that all the loot in Alterna belongs to them. Later, each of them guides one of the three 'treasures' in the area and Agent 3 has to defeat them to continue.

After collecting all three parts of the Treasure, Callie and Marie assemble it into a lawn mower-like tool, which the Captain uses to cut off the fur near the rocket at Alterna Space Center so the team can go there and save Cuttlefish.

The Captain gets hurt while using the tool, and it also breaks down. Soon after this, Deep Cut appears again trying to take back the treasure, but Marie tells Deep Cut that they do not need the treasure and that they can have it back. Deep Cut then asks Marie to be their boss, who reluctantly accepts.

On their way to the rocket, the party overhears that Mr. Grizz plans to use Cuttlefish and the Golden Eggs (collected by the unwitting Inklings and Octolings in Inkopolis and Splatsville working in his company) to 'restore the balance of the world'. When asked about the reason for hunting treasures, Shiver and Frye explain that they want to sell the treasure to help those in need in Splatsville, while leaving little to themselves, which makes Callie and Marie respect them.

After completing all the sites, Agent 3 has to get on the rocket which is covered by Fuzzy Ooze. Once they get to the top, they and the New Squidbeak Splatoon find Cuttlefish all dried up and lifeless, as a result of being dehydrated by Mr. Grizz. Grizz, now revealed to be a grizzly bear, then appears and escapes on the rocket, which will then spread Fuzzy Ooze all over the Earth and bring forth a new era of mammalian dominance.

The Captain drops a tear on Cuttlefish's body, which makes him come to his senses. Deep Cut appears again and helps Agent 3 and Smallfry reach Mr. Grizz's rocket. There, Agent 3 and Mr. Grizz engage in a fight. After having some of his Fuzzballs splatted, Mr. Grizz knocks Agent 3 and Smallfry out from his rocket as he absorbs the Fuzzy Ooze and plans to send it on the Earth himself. Soon, DJ Octavio, now knowing who the true culprit is, appears in his modified Octobot to save the two. DJ Octavio, the Squid Sisters and Deep Cut then play the Calamari Inkantation 3MIX together, causing Smallfry to evolve into Hugefry, who then fights Mr. Grizz as DJ Octavio and Agent 3 vacuum the Fuzzballs on Mr. Grizz's body, before blasting him back with the ooze, defeating him. After emerging victorious, DJ Octavio, Agent 3 and Smallfry return to the Earth together.

Comparing to the Hero Mode of the previous two games, Return of the Mammalians has a less linear progression similar to the Octo Expansion. Upon entering a mission, O.R.C.A. explains the rule of the level with dialogue and prompts the player to select one of the sets of weapons available. Different sets of weapons may have different Power Eggs rewards. Some missions also cost Power Eggs to play, and/or have special conditions that will cause the player to get splatted if they fail.

The areas in this mode are covered in Fuzzy Ooze, which serves as the obstacle blocking the path to other areas, rather than having the missions locked themselves. The player needs to use the Power Eggs they collect from the missions to clear them in order or progress.

The map screen in each of the sites tracks how many of each type of item the player has found on the overworld (loot anchors that contain decorations, golden records, Sardinium, and Sunken Scrolls). The map highlights areas with unobtained items to find in green, labeled as Areas of Interest, whereas it marks areas which the player hasn't been to yet with black striped squares labeled Parts Unknown. If the player fully collects all items in a site and goes to every possible part of the map so that there are no longer any black squares, the site becomes marked as "Surveyed". Marie will award the player with a piece of the map of Alterna as a sticker if they survey that site.

Fully surveying all sites causes a Shel-drone to appear. Each day the player can charge this drone by using 999 power eggs. The following day, the drone will send an item to the lobby terminal. These items include Tableturf Battle card packs, and meal tickets, as well as decorations that can only be found in Alterna. This is currently the only way to get duplicates of these decorations. If the Shel-drone doesn't appear after the player surveys every area, they will need to go back to Splatsville and Alterna again.

No. 1 Octarians in the Crater? YIKES!

0206 Getting Lost in Three Easy Steps

0402 Octohoppers Don't Have a Sense of Humor (and They Hate Puns)!

0412 The Path to Perfect Penmanship

0501 Trouble Round Every Corner

0502 The Upside to Enemy Backsides

0504 Barriers! They've Got You Covered

0506 Zipping over the Neighborhood

0513 Learn to Reflect, and This One Is in the Bank

2 Return of the Mammalians