Splashtags are a Player Settings option in Splatoon 3. They are used to display players' in-game nicknames and can be customized with different designs, badges, and title combinations. Players can unlock new options as they play through Splatoon 3. Banners additionally feature a four-digit ID number to identify players with the same nickname, which is changed whenever the player changes their nickname.

Players can edit their Splashtag's appearance through the Status tab of the menu. After playing their first battle, players can register their Splashtag and pick their nickname at the Lobby Terminal located in the Battle Lobby. Players may then pick another nickname at any time, but must wait at least 30 days between changes. 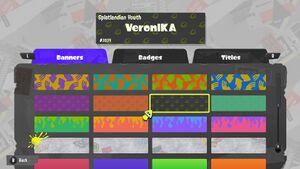 Banners are the pattern found on Splashtags, consisting of a background color, pattern, or image with text color. They can be obtained from the Catalog, the Shell-Out Machine, the Salmon Run Shop, or via QR code. 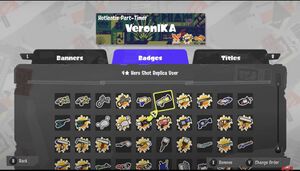 A variety of Badges can be earned through achievements and playing the game, and up to three of them can be displayed at once on the bottom-right corner of a player's Splashtag. 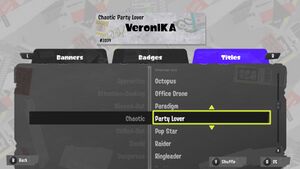 Titles are displayed in the top-left corner of the Splashtag. They consist of two words or phrases that can be mixed freely to best reflect the player's personality. The player can shuffle titles to obtain a random combination. Aside from some special titles, each player will unlock titles in a different order as they play the game. Titles can also be obtained from the Catalog and Shell-Out Machine.

"Splashtag" is a portmanteau of the words "splash" and "hashtag".