For other pages associated with ink, see Ink (disambiguation). 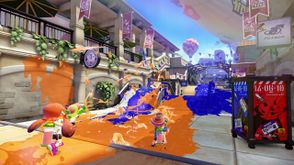 Ink in action in a pre-release version of Arowana Mall.

Ink is the main projectile used in the Splatoon series as well as a means of navigation. It comes in a variety of team-based colors that are randomized with each battle. Walls and ground alike can be covered with ink, but it goes through grates and cannot be applied to ink-resistant surfaces such as glass, tarps, and bumpers present in some stages. It allows players a degree of stealthiness, as Inklings and Octolings in squid and octopus forms can hide in their ink and ambush enemies. The signature ink colors are orange and dark blue in Splatoon, neon green and pink in Splatoon 2, and yellow and bluish purple for Splatoon 3.

The effects of moving in enemy ink.

A squid hiding in its team's ink.

An Inkling using an inkrail.

Ink can be used in a variety of ways, including as a projectile. Being hit by enemy ink causes players to take damage and become visible to their opponents on the map. After taking enough damage, players are splatted and eventually respawn. When attempting to swim or walk through enemy ink, Inklings and Octolings take damage, though this alone cannot splat them. Their movements also become very slow, and if they are in squid or octopus form, they are forced back into humanoid form. Equipping gear with the Ink Resistance Up ability helps to reduce the effects of being in enemy ink, and, in Splatoon only, Defense Up can be used to reduce damage taken from being hit by it.

Ink can also be fired at various inkable surfaces and other characters. Once a surface is coated in ink, players of the same ink color can swim through it, allowing them to move more quickly and climb up walls. When staying still in their ink, players can hide and ambush enemies, and when swimming fast enough they only create small ripples. Equipping gear with the Ninja Squid ability hides these ripples entirely, further improving the wearer's ability to move undetected.

In Splatoon 2, improved graphics were added to ink, including better shading, brightness, and sharpness. Also, trails can now be seen in ink where players swam.

Droplets and trails where players swam in ink is more distinct in Splatoon 2.

Main weapons and sub weapons both require ink, with the specific amount needed varying between different weapons. Ink requirements can be reduced by equipping the Ink Saver (Main), Ink Saver (Sub), Last-Ditch Effort, and Comeback abilities. If players do not have enough ink to use a weapon, they are warned of it and their ink tank flashes with a large red "X". Ink slowly refills automatically, but swimming in one's ink refills it much faster. Ink Recovery Up increases the speed at which ink is regained.

Some devices allow ink to be used in even more ways. Inkrails and Ride rails exist for transportation, as Inklings and Octolings in squid and octopus forms can use them to get to otherwise inaccessible areas. Sponges expand for use as a platform when hit by the player's ink and shrink when hit by that of an opponent. Splat-Switches, when covered with ink, cause objects to move. Ink can also be used to spin propellers, which power the movement of various platforms. Finally, Balloon Fishes can be popped with ink to create an explosion much in the manner of player bombs.

Neutral color values are used for objects such as barriers and the Squid Bumpers in the Shooting Range and can help with identifying a set. However, some sets seem to use different values for some objects. In Splatoon 3, this color is also used on a few HUD elements, such as on the "GAME!" screen that appears at the end of a match, the map to indicate neutral objectives - such as un-captured Splat Zones or Towers - and to highlight the currently selected player.

Ink color names come from what they are called in Splatoon's files. Some names do not match the visible color; the reason for this is unknown.

Callie and Marie talking about the vanishing property of ink.

Splatfest color sets are downloaded, stored for Splatfest, and then removed afterwards.

When modes of Ranked Battle are played in Private Battle the order of the ink colors for the teams are predetermined with the order above, Alpha vs. Bravo teams.

A note about ink in Octo Canyon is that it contains glitter, which is mostly unique to this mode. The only other time this was seen was during the Frosty Fest.

Three Splatfest Ink sets use special textures, Fam vs. Friend using the same sparkly effect that can be seen in Hero Mode, Trick vs. Treat using a more matte texture, and Chaos vs. Order using a unique metallic texture.

Salmonid Ink has a slime-like texture to it, where reflections have very little diffusion and there is a faint glow on the outer edge.

The battle against Inner Agent 3 uses a different selection of ink colors than the rest of Octo Expansion, seemingly referencing the primary ink colors of Splatoon.

Unlike other ink, the Sanitized ink has a wavy effect.

The ink used by the Fuzzy Octarians features a marbled rainbow-like texture that mimics the iridescence of an oil spill, much like the Fuzzy Ooze itself. The Indigo color is used by DJ Octavio without the iridescent texture in his fight.

The ink used in the boss fights against the members of Deep Cut contains the Deep Cut logo in a repeating pattern. The logos are slightly darker than the rest of the ink for Frye and Shiver, but the logos in Big Man’s ink are yellow, as a reference to Super Mario Sunshine’s Phantamanta boss.

These colors are used during the character customisation sequence and the short tutorial on the way to Splatsville.

These colors are used when practicing against Boss Salmonids in the Grizzco training manual.

In the files exists the following color set for Tricolor Turf War. It is named "TricolorDefault", but its purpose is currently unknown.