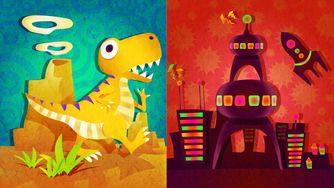 Past vs. Future was a Splatfest event in Splatoon. It was held for North America only. It was announced on 9 January 2016. The results were given on 17 January 2016.

The three stages selected for this Splatfest were Kelp Dome, Hammerhead Bridge, and Piranha Pit.