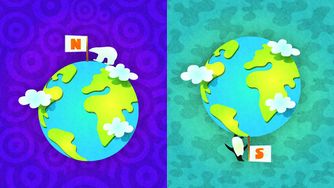 North Pole vs. South Pole was a Splatfest event in Splatoon. It was held in Europe and Oceania. It was announced on 1 August 2015. The results were given on 9 August 2015.

The three stages selected for this Splatfest were: Arowana Mall, Camp Triggerfish and Moray Towers.