For the Japanese Splatfest from Splatoon 2 (regarding pineapple on the traditional dish Subata), see No Pineapple vs. Pineapple. 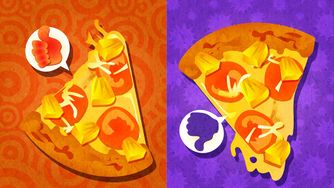 Delicious vs. Disgusting was a Splatfest event in Splatoon. It was held in Europe and Oceania. It was announced on 5 December 2015. The results were given on 13 December 2015.

The three stages selected for this Splatfest were: Arowana Mall, Kelp Dome and Museum d'Alfonsino.