Museum d'Alfonsino is a stage that features five rotating displays, which are central to navigation, as well as reaching vantage points. The spawn point of the stage is at a courtyard entrance, with a path to the left leading towards a large rotating display, and a path to the right leading to the center of the stage. Directly in front of the spawn is a small rotating platform with four spokes that spins counterclockwise without stopping. Continuing to move forward leads to large displays with three spokes that rotate a third of the way before stopping for five seconds. When stopped, they align perfectly with the rotating platform in the center of the stage. The large displays are entirely inkable, allowing players to climb up and reach grated platforms on the right side of their walls. The center of the stage is located to the right of these platforms, relative to the spawn point. In the center of the stage is a lower area with a rotating display with four spokes in the middle. It rotates counter-clockwise a quarter of the way before stopping, aligning with the large displays. To the left and right of the center stage are lowered areas with statues where most of the battling on the stage takes place. The sides of the stage contain large pools of water which players must look out for when jumping from the left side route to one of the large rotating displays. In Turf War, the final score is determined by where the rotating platforms stop at the end of the match.

The spawn points for both teams have been moved to the first rotating display. The Splat Zone is located in the center of the stage. Inking the rotating display does not count towards capturing the zone. Many platforms and one statue have been added near the center and the central display has been shortened to make jumping on it from both sides easier.

In Splatoon 3 the Splat Zone is located in the center, being slightly bigger than in Splatoon. The display on each team's side has been altered, having 2 sections instead of three and having them directly across from each other.

The spawn points for both teams have been moved to the first rotating display. The Tower in this mode is located at the center of the map, replacing the central display. The goal is found right outside the enemy's spawn point, after going through the giant display. The wall sticking out on both giant displays has been removed and many blocks and barriers have been added, including the platforms from Splat Zones. When the Tower is occupied, it first goes straight and around the outside of the giant display over the water. It then turns left and heads for the goal.

The Rainmaker starts on top of the shortened central display. The goal is located on the rotating display in the enemy team's spawn point. The giant displays have been altered a bit: they both have one section removed and they now rotate one-third counter-clockwise, then one-third clockwise, never stopping with the removed side towards the middle. Several boxes have been added to create additional ways of reaching the opposing team's base and a small section left of each team's spawn point has been blocked off.

In Splatoon 3, the pedestal has been moved closer to the enemy side, with a ramp added for access. Another ramp is added for easier access to the first display area. There is only one checkpoint, which is right after the ramp. The rotating display on each team's sides has been changed, removing one section and making another much shorter in height.

The basket is located just before entering the opponent's pit. A ramp has been added and a block to the left, allowing access to the opponent's side. 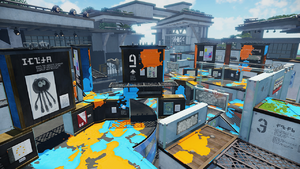 Museum d'Alfonsino was released 14 November 2015 at 02:00 UTC[1] after being leaked on the SplatNet stage schedule on 12 November and formally announced in the Nintendo Direct later that day.

Museum d'Alfonsino was available in the following Splatfests in Splatoon: 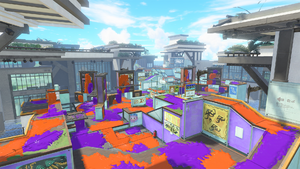