The Clash Blaster is a main weapon in Splatoon 2 and Splatoon 3.

The Clash Blaster's main body is a light navy blue and shaped a bit like a pencil sharpener. Surrounding it is a ring of crayons that change color to match the user's ink that resembles a gun belt. Coming down from the body is a metal trigger and a handhold with black padding. Sticking out of the front of the body is a flat, rectangular, metal part that delivers the shots. Atop this part is a sight the same color as the body. 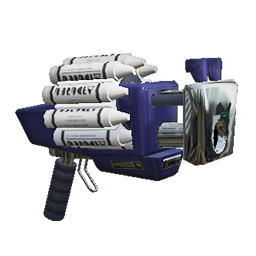 The Clash Blaster fires at a short range, and at very high speed, but takes two direct hits to splat an opponent. The design appears to use crayon-like objects. The Clash Blaster behaves as a pressure-based weapon. Compared to other blasters, which require a direct hit for quick splats, the Clash Blaster fires more rapidly, increasing mobility and turf coverage. The Splat Bomb sub weapon complements standard fire by offering the ability to corner opponents and weaken opponents for faster splats. The Sting Ray can be used to pressure opponents outside of its range and refills the player's ink tank. 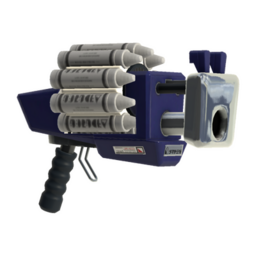 The Clash Blaster returns in Splatoon 3 with the same attributes and appearance as the previous game. Its set is the Splat Bomb and Trizooka.

It appears in only 1 mission in Alterna:

Reaching certain Freshness levels with the Clash Blaster will reward the player with special badges that they can use on their Splashtag.