The Splat Brella is a main weapon in Splatoon 2 and Splatoon 3.

The weapon's shots resemble that of a shotgun; it has wide spread and short range, but not as wide and short-ranged as a roller. The player can press and hold to open the umbrella, which will shield the player from any attacks in the direction they are facing. If the player continues to hold for about two seconds, the umbrella will separate from the weapon and fly forward, becoming a fast-moving shield that the player can use to penetrate enemy defenses. Once separated, the player will not be able to use the umbrella's opening function for a few seconds.

In Splatoon 2, the Splat Brella has a black handle with blue highlights with the Sorella logo on it. The canopy is red and white with sections that change color to match the user's ink. The canopy also has Sorella logos and stylized seahorse designs.

In Splatoon 3, the weapon has a new design. The logo on the handle is replaced by the Foil logo and parts of the canopy that change color to match the user's ink has been changed to occupy most of the canopy, although the canopy still has Sorella logos (albeit in altered positions). 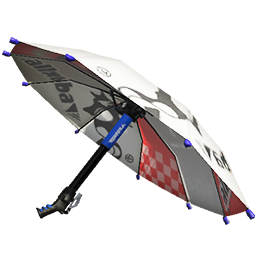 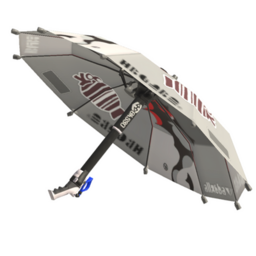 The Splat Brella returns in Splatoon 3 with a new design and Sprinkler and Triple Inkstrike. It was first shown in a video demonstrating the brella class on the Japanese official website on 22 April 2022.

It appears in 2 missions in Alterna:

Reaching certain Freshness levels with the Splat Brella will reward the player with special badges that they can use on their Splashtag.

For competitive tips about the Splat Brella