The Undercover Brella is a main weapon in Splatoon 2 and Splatoon 3.

The Undercover Brella is a brella that can be fired in rapid succession while its semi-transparent shield is open. The shield will open after the first shot fires if the user is holding down the trigger. The shield cannot be launched, and has the lowest durability in its class.

Each shot consumes 4% of the ink tank capacity, allowing users to fire 25 shots before needing to refill. Each shot contains several ink bullets that deal between 9 and 12 damage each, and up to 40 damage will be dealt per shot if most ink bullets hit the opponent. Three well-aimed shots are needed to splat opponents with the Undercover Brella. Opponents who touch the shield will take 15 damage, which is half the damage taken from touching the shield of a Splat Brella or Tenta Brella.

The Undercover Brella looks like an ordinary black umbrella. The handle is striped in multiple shades of brown, and the main shaft changes color to match the user's ink. The shield is black and semi-transparent with black beads and a brown-and-gold muzzle on top. 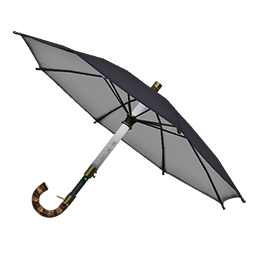 The Undercover Brella was announced as a part of the November 2.0.0 update. It was released on 30 December 2017 at 02:00 UTC. It comes with Ink Mine and Splashdown. 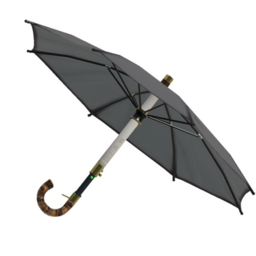 The Undercover Brella returns in Splatoon 3 and has nearly identical stats to Splatoon 2, with the only difference being its special point requirement raising from 150p to 180p. Its kit now has Ink Mines and the Reefslider.

Reaching certain Freshness levels with the Undercover Brella will reward the player with special badges that they can use on their Splashtag.