Wiper redirects here. For the Japanese name of the weapon class, see splatana.

The Splatana Wiper is a main weapon in Splatoon 3.

The Splatana Wiper resembles a car windshield wiper with what appears to be a long yellow sponge as the "blade" and a hilt of a badminton racket. 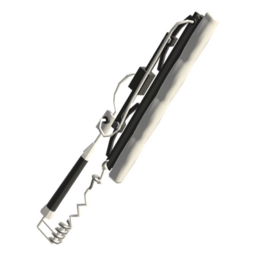 The Splatana Wiper was revealed in the Splatoon 3 Direct on 10 August 2022. Pressing allows for quick horizontal slashes that fire ink, but holding the button will charge it for a more powerful vertical slash, which can instantly splat opponents at close range.

The Splatana’s projectiles are perfectly accurate, even when jumping, and the weapon has a very fast strafe-speed while performing uncharged slashes - though unaffected by Run Speed Up - which combined with its ability to ink long lines quickly, make it a very mobile weapon.

Moving forward while firing the charged shot will allow the player to lunge forward a short distance, which will also delay the slash until the end of the lunge. The player cannot lunge after jumping.

Charged slashes from the Splatana Wiper appear to only have one segment, unlike the Splatana Stamper’s larger charged slash. In practice, this means that the slash can be blocked entirely if it grazes a ledge or ceiling, for example beneath the rotating walls in Museum d’Alfonsino.

Reaching certain Freshness levels with the Splatana Wiper will reward the player with special badges that they can use on their Splashtag.

For competitive tips about the Splatana Wiper

Splatana is a portmanteau of "splat" and "katana" and Wiper references the weapon's resemblance to a car wiper.