Players must land four hits to splat an opponent, doing the same damage as the Dualie Squelchers but having worse accuracy pre-roll. Dodge roll ink consumption is lower than all other dualies', complementing the weapon's ability to roll four times in quick succession. In the post-roll state, the weapon's firing rate and accuracy are improved.

The Dark Tetra Dualies each consist of two main parts, each in a crescent shape. The main white part of each dualie serves as a front plate, housing two muzzles and four compartments-one for each dodge roll. It has green and purple highlights. The main black part is smaller than the white part and serves as a handle. It has white highlights. 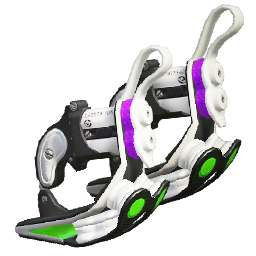 The Dark Tetra Dualies come in a set with Autobombs and Splashdown.

They appear in one Octo Expansion Station: 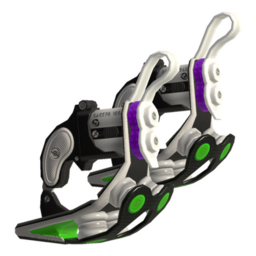 The Dark Tetra Dualies return in Splatoon 3, looking identical to the previous game. Its kit has Autobombs and Reefslider.

Reaching certain Freshness levels with the Dark Tetra Dualies will reward the player with special badges that they can use on their Splashtag.

For competitive tips about the Dark Tetra Dualies