When fired, the Splat Dualies spray ink from both of the player's hands. Two reticles are displayed as a result, and each reticle acts independently, so an obstruction of one Dualie does not inhibit the shots of the other.

(jump) while firing causes the player to quickly roll in the movement direction, leaving behind a small cone of ink. The player then enters a crouch for a short duration. While crouched, the player's reticles are merged and shots are concentrated on one point; however, walking is disabled. Rolls may be used up to two times consecutively before the player must stand again. 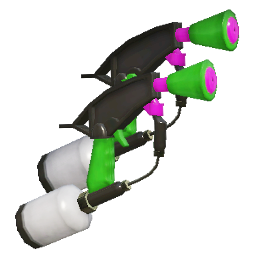 The Splat Dualies come with Burst Bombs and Tenta Missiles.

For competitive tips about the Splat Dualies