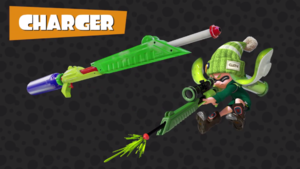 Chargers are one of the main weapon classifications in the Splatoon series. Chargers have the ability to charge up their shot, which can take enemies out immediately with a long-ranged attack, as well as a "tap shot", which is a partially charged shot that does not deal as much damage. It is an ideal weapon for players who like to support from the back lines of battle. In Splatoon 2, the ability for most chargers to store a charge was added. By holding

while swimming in ink, a charge can be held for a few seconds, along with a "piercing mechanic" for full charges in which multiple opponents can be splatted with one shot. The former isn't available for all scoped chargers plus the Grizzco Charger, while the latter includes them. The Bamboozler 14 Mk I and its variants are the exceptions for both.

With the Inkling Girl amiibo, the player can use the Hero Charger for Octo Valley missions to win a Hero Charger Replica, which can be used in multiplayer matches.