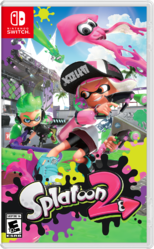 Splatoon 2 is a third-person shooter developed and published by Nintendo for the Nintendo Switch console, and the sequel to the Wii U game Splatoon. The game builds further on the ink-based shooting mechanics introduced in Splatoon, with the general gameplay being identical, but adds new content including new weapons, stages, and a new horde mode named Salmon Run.

The game was first teased on 20 October 2016 during the reveal trailer for the Nintendo Switch and released worldwide on 21 July 2017.[3] A physical version of the game with its Octo Expansion DLC built in was released in Japan,[4] Hong Kong,[5] and Taiwan[6] on 8 October 2021.

The game proved to be massively successful, selling over 2.5 times as many units as Splatoon (13.3 million[7] vs. 4.95 million)[8] and going on to become approximately the twelfth-best-selling Nintendo Switch title.

Splatoon 2's sequel, named Splatoon 3, was announced for the Nintendo Switch on 17 February 2021. It is currently scheduled to release on 9 September 2022.

Although teased with the reveal of the Switch console, Nintendo did not officially confirm this or any other game showcased in the video as being in development at the time.[9][10] The title was officially unveiled on 13 January 2017 at the Nintendo Switch Presentation in Tokyo, Japan[11] and a demo was playable at Switch hands-on events. The Splatoon 2 Global Testfire demo was playable from 24 to 26 March 2017.[12]

There are three versions of the game: Japanese, North American/Oceanian, and European. The purpose of the three versions is to separate region-based content such as Splatfests, especially ones containing advertisements. Previously, Oceania received the European version of the first Splatoon before receiving the North American version of this game. Each version has its own translations of the game, even with slight differences between the North American/Oceanian and European versions' English, French, and Spanish translations. For the European version, the game was also localized to Dutch, German, Italian and Russian.

The events of the story mode take place two years after the completion of the first game's Octo Valley mode, while Cap'n Cuttlefish is on vacation with Agent 3. Callie and the Great Zapfish have disappeared and Marie recruits the player, designated Agent 4, to storm Octo Canyon to search for them. The Squid Sisters Stories mention the snow globe DJ Octavio was imprisoned in is shattered and Cap'n Cuttlefish's shack is smashed. This mode is set in Octo Canyon, a place similar to Octo Valley from the first game.

The events of the Octo Expansion story mode take place at the same time as the base game's story does. The Octo Expansion is the 'vacation' Agent 3 and Cap'n Cuttlefish are on, which is referenced within the base game's single-player campaign. When Cap'n Cuttlefish and Agent 3 were in Octo Valley, Agent 3 battled against an Octoling that somehow led to both the Octoling and Cap'n Cuttlefish being captured and taken deep underground to an abandoned station in the Deepsea Metro, ran by the Kamabo Corporation. With the Octoling having lost their memory, they are nicknamed 'Agent 8' and team up with Cap'n Cuttlefish to ride the Deepsea Metro and escape the facility, along the way collecting mem cakes, which are physical manifestations of Agent 8's lost memories. Agent 8 and Cap'n Cuttlefish meet mysterious and shady characters such as the Telephone, C.Q. Cumber, Iso Padre and familiar faces such as Pearl, Marina and Agent 3.

Like its prequel, Splatoon 2 is a third-person shooter game focused on online multiplayer battles, in which eight players are divided into two teams of four. Players have two main forms and may switch between the two at will: their humanoid form, in which they can use weapons to spread ink and splatter opponents, and their squid form, which they can use to swim through ink at great speed and up walls, recharge the player's ink tank faster (while in their ink) and hide in their team's ink. Players can also utilize sub weapons, such as Splat Bombs, and special weapons, such as Splashdowns.

In the primary game mode, Turf War, players are awarded points based on the amount of turf (ground) they cover in their team's ink— the team that covers the most territory within three minutes wins the match.

A total of twenty-three stages are normally playable in Splatoon 2. Of these stages, fourteen are brand new, while the other nine are returning from Splatoon.

During Splatfests, a special stage called Shifty Station would be added to the rotation. The layout of this stage changed each Splatfest, and each layout was eventually made available in Private Battles with separate names. These stages are only available in private Turf War battles.

Splatoon 2 features both new and revamped stages, weapons (such as the Splat Dualies), special weapons (such as the Splashdown and Inkjet), and gear items, as well as additional character customization in the form of hairstyles and legwear. The game also allows for local multiplayer with up to eight people. Certain elements of the Heads-Up Display have also been revamped, showing the weapons each player has and whether their Special Weapons are ready to be used.

Judd is accompanied by a new cat with a smaller, younger and near-identical appearance to Judd's, named Li'l Judd.

After update version 2.0.0 the max level will be 99 (instead of 50 in the original game). After the player talks to Judd after reaching level 99 the player will have the option to restart at level ★1 and continue leveling up.

In addition to the new level cap after the update, players will be able to change their gear without having to leave the match room.

All ranked modes from the original Splatoon returned in Splatoon 2. All three have been changed in at least one way. The Rainmaker shoots large blaster-like exploding shots instead of a large ink tornado. Splat Zones has a new HUD UI that shows how much of the zone is captured. Tower Control now has checkpoints where the tower stops for approximately 5 seconds.

Salmon Run is a new co-op mode, in which players collect Power Eggs and Golden Eggs by defeating Salmonids to complete missions.

League Battle is a new online mode replacing Squad Battle, in which teams of two or four battle other teams to gain points in two hours.

On 13 December 2017 in the 2.1.0 patch, the first brand-new mode for Splatoon 2 was introduced. The mode Clam Blitz was added to the Ranked Battle stage schedule, alongside Splat Zones, Rainmaker, and Tower Control.

The objective of Clam Blitz is to pick up clams, which are scattered around the stage, and deposit them into the goal near the opposing team's base. The team who scores 100 points by depositing clams, or has the most points scored when the timer runs out, wins the match.