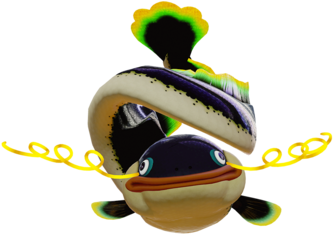 The Great Zapfish is a character in the Splatoon series. It is an extremely large Zapfish that powers all of Inkopolis and Splatsville. In all three games in the series, it is captured and must be rescued by the player in a single-player mode.

Unlike other Zapfish, the Great Zapfish is massive and more similar to the real-life electric catfish. It has yellow curled whiskers that give off electricity, an orange mouth, a peach face, a dark blue body, a small, dark blue tail with lime green along the edges, and similarly colored fins.

Following the events of Return of the Mammalians, the Great Zapfish returns to Splatsville, albeit with an altered appearance. Its whiskers no longer glow, and occasionally sparks of electricity will appear at the base of its whiskers, sending a shockwave throughout its body. It also has a single strand of hair on its head.

The Great Zapfish in Inkopolis Plaza.

After collecting all regular Zapfish, the player finds the Great Zapfish in the possession of DJ Octavio, leader of the Octarians, who baits the player into saving it before sucking it up into his Great Octoweapon, the Octobot King. After the player defeats Octavio with the help of Agent 1 and Agent 2, the Great Zapfish is saved and can be found resting on Inkopolis Tower for the rest of the game.

The Great Zapfish makes a cameo appearance in the stage Piranha Pit, where it occasionally rises from the water in the background. Embroidery depicting the Great Zapfish also appears as decoration on the Zapfish Satin Jacket.

As the player enters Inkopolis Square for the first time, an Inkopolis News report is cast by Pearl and Marina informing everyone that both the Great Zapfish and Callie have gone missing. After the player goes to Octo Canyon for the first time, Marie explains that Callie and the Great Zapfish have been taken by the Octarians. The player is given the Hero Suit and joins the New Squidbeak Splatoon as Agent 4. The player goes through a series of levels, obtaining both regular and mini Zapfishes along the way. After completing all levels, the player must defeat DJ Octavio in a final boss fight. With the help of Sheldon and Marie, the player defeats DJ Octavio and saves Callie and the Great Zapfish. After DJ Octavio's defeat, the Great Zapfish does not return to Inkopolis Tower, but will instead be resting on Deca Tower or on the tracks above Grizzco Industries, or even flying around the sky, producing a barely-audible jingle (the same jingle that plays in the final level of Octo Canyon, Tide Goes Out, when DJ Octavio is sucking the Great Zapfish into the Octobot King).

The Great Zapfish also appears in Piranha Pit and on the Zapfish Satin Jacket just like in the first game.

In Splatoon 3, when the player first enters Splatsville, a special Anarchy Splatcast broadcast takes place in which Deep Cut reveal that the Great Zapfish has gone missing again. In Return of the Mammalians, it is eventually revealed that the Great Zapfish was stolen by Mr. Grizz and used as a source of power for his rocket The Spirit Lifter, which he planned to use with the intent of covering the planet in Fuzzy Ooze. It is located in the steerage section. Following Mr. Grizz's defeat at the hands of Agent 3, the Great Zapfish returns to Splatsville, resting on the Battle Lobby Tower, with Deep Cut remarking on its slightly different appearance in another special Anarchy Splatcast report.

Like in the previous games, the Great Zapfish also appears on the Zapfish Satin Jacket.