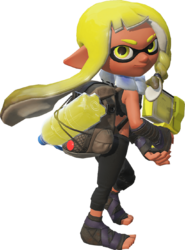 This article is about the player character of Splatoon 3. For the recurring character who debuted in Splatoon, see Agent 3 (Splatoon).

Agent 3 is the codename given to the player character of Splatoon 3 by Craig Cuttlefish in Alterna. This makes them and Smallfry the newest members of the New Squidbeak Splatoon. They notably share the title with the series' first playable character, Agent 3 from Splatoon. This is due to the previous Agent 3 being promoted to Captain, leaving the position of Agent 3 open for recruits.

Agent 3 can have a variety of appearances, depending on the player's choice of style, skin color, eye color, eyebrows, and hairstyle. They wear a new version of the Hero Suit, of which two types, each equipped for different situations, have been confirmed so far. Although having different appearances, both versions of the suit feature a backpack to store Smallfry. This Agent 3 can also be an Octoling, in contrast to the Octo Canyon and Octo Valley.

This Agent 3 is a Splatsville youth who earns a living salvaging scrap with their companion Smallfry. After a chance encounter with the New Squidbeak Splatoon, who are fighting the Octarians, they are appointed "Agent 3".[1]