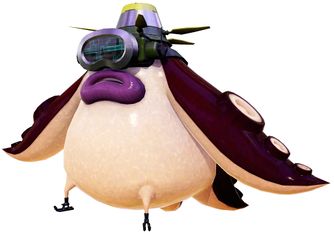 In each level, an Octostriker rests in a pool of purple ink atop a flying saucer over the stage. When Agent 3 arrives, a short cutscene shows it awakening and beginning to fire Inkstrikes from a cannon on its head. Agent 3 must then navigate the level and its various enemies while evading these attacks. However, a large purple marker on the ground allows Agent 3 to anticipate them, and the Octostriker cannot target them at all if they are hiding in their own ink. At the end of the mission, they will be able to Super Jump up to the Octostriker's flying saucer and engage the creature directly, making it something of a mini-boss.

When Agent 3 arrives on the saucer, the Octostriker will float out of its pool and begin flying around, though rather slowly and awkwardly. It can still launch Inkstrikes, but its main defense is the group of other Octarians it summons, which must be splatted or evaded by Agent 3. Either way, the Octostriker takes priority; defeating it ends the mission, splatting all other Octarians aboard the saucer. It also drains the pool of ink, revealing the Zapfish powering the saucer.