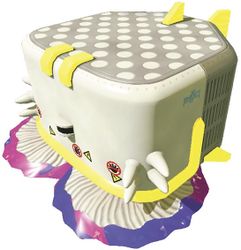 Industrial Squee-Gs are enemies that appear in Splatoon 2's single-player modes, Octo Canyon and the Octo Expansion. They are larger variants of Squee-Gs.

Industrial Squee-Gs are similar in design to regular Squee-Gs in that they both look like robotic fish with two triangular fins at their sides, a tail at the back, and spikes on the front presumably imitating whiskers. However, Industrial Squee-Gs are much larger and are lethal to both Inklings and Octarians. On their flanks, they have a row of vents, and the tail at the back swishes side to side. There are two spinning brushes at the front and stickers indicating that the machine is dangerous. Usually, an Industrial Squee-G has armor, Power Eggs, or other items on top of it, and is found either on narrow pathways or in large open areas with lots of Octarians. They can also be locked in a vault, in which case they will remain stationary until the vault is unlocked. Some are even found with Bounce Pads, platforms or Dash tracks on top of them.

The Industrial Squee-G has a priority list of targets that dictate where it goes at any given time. The list of targets is as follows, from the highest to the lowest priority:

If none of these targets are available, the Industrial Squee-G will enter an idle mode where it slowly spins in a circle, indicated by cyan lights.