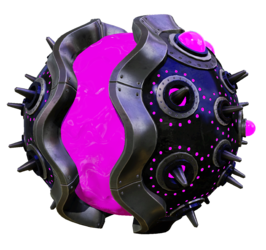 This article is about the character. For the mission by the same name, see The Rampaging Octowhirl!.

The Octowhirl is one of four Great Octoweapons battled in Octo Valley.

The Octowhirl is a giant, black, round, clam-like Octoweapon with several black spikes around its body and an antenna. It has Octarian eyes that swap between being white and purple. Its "mouth" is also filled with purple ink, and in that ink is the tentacle present on all Octoweapons.

The Octowhirl trying to attack Agent 3.

When Agent 3 arrives at its Kettle in Sector 3, a Zapfish is granted to the Octowhirl. It will then attempt to spin right into Agent 3, and can only be stopped by a large puddle of ink. Once trapped in ink, the Octowhirl's tentacle is revealed and can be splatted. Each time a tentacle is splatted, the Octowhirl will scream loud enough to cause some of the panels on the floor to spin. After its tentacle has been splatted three times, the Octowhirl is defeated and explodes.