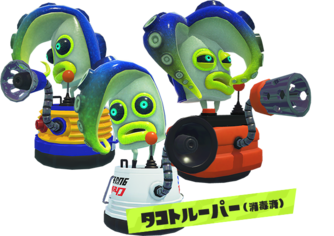 Sanitized Octarians are a variation of Octarians that have been sterilized or disinfected[1] and had "life's energies" purged from them.[2] They resemble ordinary Octarians but with different coloration.

During the Turf War, Commander Tartar itself is revealed to be coated in an amount of the sanitizing ooze, wherein it has a sanitized Octarian tentacle. The NILS Statue's cannon is also armed with sanitizing ink.

Sanitized Octarians are visually distinct from normal Octarians by their coloration: a blue-to-neon yellow gradient on their tentacles and eyes with black sclera and glowing aqua blue irises. Elite versions (such as Sanitized Elite Octolings, Sanitized Rocket Octocopters, and Sanitized Rocket Twintacle Octotroopers) have a darker blue and the same yellow in the gradient.

Their voices sound more digital and compressed, and when splatted, they briefly produce glowing blue pixels and glitch-like squares. Instead of the glitter-like effect that ink has in Octo Canyon, the Sanitized Octarians' ink, which is the same as the one used to sanitize them, resembles dishwasher detergent or hand sanitizer.

Sanitized Octarians have been sterilized of life's energies with blended ink[2] created by Commander Tartar. Subjects that are candidates of aiding this ink's creation are tested through the Kamabo Co. underground research facilities. The conclusion of the tests results in them being tricked into being blended to help create the ink. The process of sanitizing Octarians with this ink results in them losing all memory and identity and submit to Kamabo Co.'s ideas.[2] Marina notes that the Sanitized Octarians appear to have no pulse or signs of life.

The following Octarian types have Sanitized variations. Types denoted with an asterisk have only appeared in their Sanitized forms.