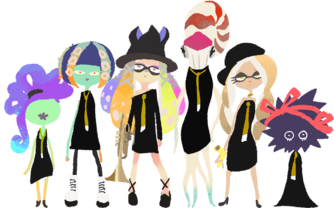 Ink Theory is an all-female six-piece jazz band. The band has a history of classical training, with the members learning music since their childhood long before making their debut. Their songs were added in Version 2.0.0 of Splatoon 2.

Yoko is the band's trumpet player and frontwoman, though she sometimes feels overshadowed by the other members' personalities. She is an Inkling with a mutation that allows her tentacles to have multiple colors, but it rarely proves useful. She is described as often getting nervous before large productions. She also has a weakness to atmospheric pressure; on rainy days she is said to have a dead face and while she struggles in sunny weather as well, she is a hard worker and always gives a solid performance. She has a sister in high school.[1]

Karen, the band's pianist, is a nautilus who graduated at the top of her class from a famous musical university. She has participated in overseas competitions and has won many awards, as well as offering emotional support to the band. She provides the band with a crisp atmosphere, and looks self-assured, though she worries that she is not loved by fans. She formed Ink Theory after being amazed by Hightide Era's music[1], specifically by Taka, who was a senior at the same school.[2]

Zuzu, the kazoo player, is an Inkling who graduated from a famous music academy. She is closer to the public than the other members of the band, and is renowned for her beauty, often being considered the "flower" of the band. As a result of this, she gets a lot of attention, often being pulled in front of cameras. Fans address her with the Japanese honorific "-sama", which is used to address those one considers to be on a higher rank than oneself. She is a large spender but has never struggled much financially.[1]

Oonie, the band's bassist is a sea urchin, specifically Hemicentrotus pulcherrimus. She grew up in a strict household with parents who are famous musicians. For a short while, she favored bands with a different musical style from her parents, but lately, she has been observing classical music in a new light. She is romantically inexperienced, often falling for self-degrading people.[1]

Maya is the band's percussionist. She is a sea anemone who joined Ink Theory after graduating from a music academy. While her professor recommended she become a music instructor herself, she decided she would rather get experience creating her own music, first. She mainly plays with Ink Theory, but occasionally freelances percussion for other bands.[1]

Kitamura is a sea urchin and the band's drummer. She acts as the band's mascot. She has a high singing voice and regularly follows new fads. She lives alone, but keeps close attention to her curfew.[1]