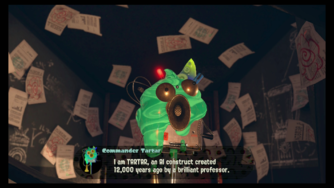 Actually It's Commander Tartar's Theme is a song from the Octo Expansion.

This song is played in a cutscene where the Telephone introduces itself as Commander Tartar and declares its plan to destroy and recreate all life on Earth with the NILS Statue.

The song is a heavily distorted version of Telephone's Theme, starting as normal (albeit with breaks every two beats), but then slows down and distorts on the third loop. Then, samples from the "Boss Entrance" theme from Splatoon and Splatoon 2 play alongside said distorted vocal.

In-game, there is an extra part that is not heard on the Octotune version, consisting of repeated vocal intro and percussions. This part plays as the NILS Statue opens its mouth to reveal its cannon.